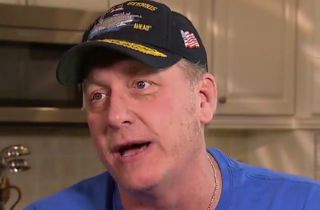 Just about a week after being fired for posting an inflammatory image on social media, Curt Schilling is throwing heat at his old network’s workplace culture and supposedly liberal bias.

The former pitcher turned sports analyst spoke on Breitbart News Patriot Forum this morning, where the conversation touched on how he was let go from ESPN his derogatory post about transgender people in the wake of North Carolina’s new bathroom laws. Schilling also claimed during the discussion that there were a great number of people with the network who agreed with his conservative positions, but that the network demands its on-air talent adhere to a liberal perspective.

“It was apparent to me early on that if you wanted to go off topic as a sports person you had to go off topic left, or you were going to get in trouble,” Schilling said. “Some of the most racist things I’ve ever heard have come out of people that are on the air at ESPN. They’re some of the biggest racists in sports commentating.”

Schilling has gone into controversial territory while voicing his political opinions before. Not only has he refused to apologize for what he posted, he has compared Muslims to Nazis and said that Hillary Clinton ought to be “buried under a jail” for her email scandal.

ESPN has sent memos to its employees several times in recent months with instructions to refrain from talking politics, but Schilling said that his former colleagues would come up and agree with him on the down low.

Listen above, via SiriusXM Satellite Radio.