Curt Schilling: Those Accused of Terror Should Be Stripped of Rights and Executed

Curt Schilling: Those Accused of Terror Should Be Stripped of Rights and Executed

Former Major League Baseball pitcher and ESPN analyst Curt Schilling told his fans Sunday night that those accused of terrorism should be stripped of their habeus corpus right to challenge illegal detention without a trial, and subject to execution. 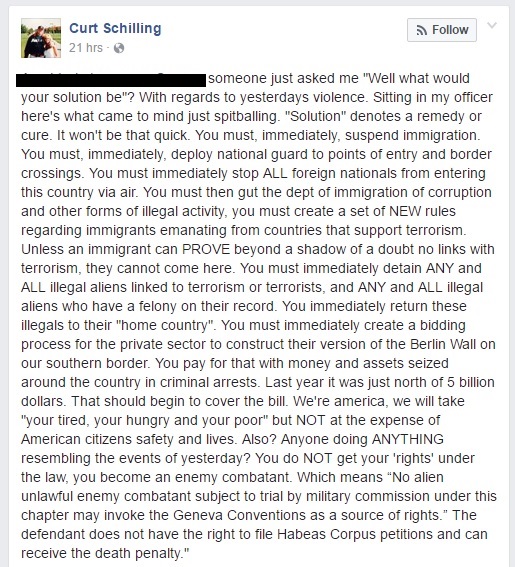 Schilling wrote that America needed “their version of the Berlin Wall” on the southern border with Mexico. “You pay for that with money and assets seized around the country in criminal arrests. Last year it was just north of 5 billion dollars. That should begin to cover the bill,” he estimated.

He added that those suspected of terrorism would be immediately stripped of their rights. “You do NOT get your ‘rights’ under the law, you become an enemy combatant. Which means ‘No alien unlawful enemy combatant subject to trial by military commission under this chapter may invoke the Geneva Conventions as a source of rights.’ The defendant does not have the right to file Habeas Corpus petitions and can receive the death penalty.”