Daily Show’s Kristen Schaal on Trevor Noah: If Not Tweets, They’d Have ‘Dug Up Something’

Daily Show’s Kristen Schaal on Trevor Noah: If Not Tweets, They’d Have ‘Dug Up Something’ 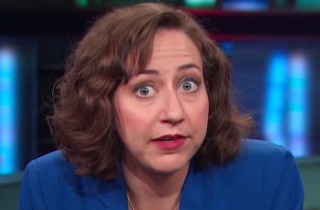 Last night Jon Stewart addressed the Twitter “kerfuffle” surrounding his successor Trevor Noah and implored the audience to give him a chance to earn their trust and respect. A few days ago, longtime Daily Show correspondent Aasif Mandvi also defended Noah and dismissed the controversy about his Twitter jokes.

And now another regular Daily Show voice is weighing in. Kristen Schaal, who has been a contributor since 2008, spoke to Salon today (mostly about her new show Last Man on Earth) and briefly addressed the controversy over Noah.

In case you need a reminder, over the past few years, Noah made a few jokes that weren’t particularly politically correct. Noah defended himself, Comedy Central defended him, and the furor has largely died down.

As Schaal told Salon, though, people were probably looking for something to be angry about:

I’m excited about Trevor, I think he’s a good choice. I think he’s up for the task. And I think it wouldn’t matter who got hired, I think everybody’s so upset that Jon Stewart is no longer hosting, that if it wasn’t his tweets, I think they would dig up something [else]… I just feel like everyone was sort of a target for who got to be announced, and in some ways, finding five or six really lame tweets in thousands is hopefully not that big of a deal. And I think Jon Stewart was really articulate last night when he said he’s going to have to earn your respect or he won’t, and that is a comedian’s job.

During Schaal’s last Daily Show appearance, she predicted the wonders of science fiction would come true before women are paid the same as men.