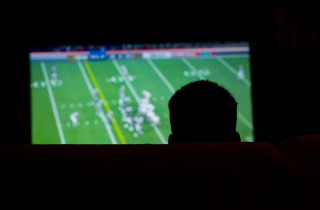 Let’s face it, lots of people go to bars to watch sports games, and that includes football. But one Dallas bar is taking a stand after the NFL’s botched handling of the Ray Rice domestic abuse fracas. The owner of Jack Mac’s Swill & Grill announced yesterday they will no longer be letting people watch NFL games inside.

The NFL has taken some steps to address domestic abuse within the league, with a new “social responsibility” task force being created to look into how it’s currently handled. But the NFL has come under so much fire this week, the possible tipping point being a Photoshopped CoverGirl campaign showing a woman in a football jersey showing off a black eye.

And then yesterday, the Dallas grill made this announcement on Facebook:

Good Evening Folks, Running a bar in Texas is not the easiest thing in the world, especially when it comes to football, so I hope you will all take the stand with me, as of today, we will no longer show ANY NFL games until the league changes it’s domestic abuse policies. It has gotten to the point where money is more important than women’s and children’s health and life are concerned, this is unacceptable in the world that I want to live in. Please join me in my small attempt to stop adding fuel to the fire and money to their coffers. ‪#‎takeastand‬ ‪#‎NFL‬ ‪#‎nomoresbuse‬

And mind you, that’s taking a bit of a business risk (though based on some of the kindly comments on that post, they might actually get a bit of a bump from this).