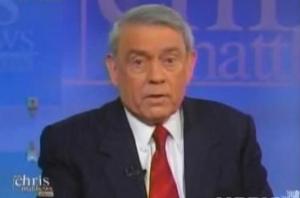 Dan Rather is responding today to the questionably-worded anecdote (“he couldn’t sell watermelons if it, you gave him the state troopers to flag down the traffic”) – and he’s doing so in a decidedly un-140-character way.

In a lengthy blog post on The Huffington Post, Rather explains why it’s, at least in part, our collective fault.

I used the analogy of selling watermelons by the side of the road. It’s an expression that stretches to my boyhood roots in Southeast Texas, when country highways were lined with stands manned by sellers of all races. Now of course watermelons have become a stereotype for African Americans and so my analogy entered a charged environment. I’m sorry people took offense.

But anyone who knows me personally or knows my professional career would know that race was not on my mind.

The “sorry people took offense” acknowledgment is the only mention by Rather of taking any responsibility for the reaction, and it clearly is a very non-apology version of an apology. The thing is, no one here, and very few anywhere else, was making the point Rather is a racist – or anything resembling someone who meant harm by his anecdote. Again, if he had used “corn” or “apples” instead of “watermelon,” there wouldn’t be any further discussion. But it is racially-tinged language, that, sure, in this age of new media, will bubble up far more than if Rather had made this comment even 10 years ago.

And that’s why Rather’s attack on us is disingenuous:

What has caused this comment to “go viral” is the trumpeting of an online and cable echo chamber that claims the banner of news but trades in gossip, gotcha, and innuendo. Furthermore, even for those who brook no prejudice, when everything is condensed to 140 characters or a small YouTube clip, many people who got this “news” did so without any context, just a headline that popped up on their phone or inbox…

While Rather is correct the new “online and cable echo chamber” caused this comment to go viral, it doesn’t mean it shouldn’t have. No, it’s not the type of ‘important’ news Rather is doing at HD Net, which he details at the end of the blog post but tries not to sound “self-aggrandizing.” But it isn’t a “distraction” to talk about the language of race – and someone like Rather should know that. He isn’t exempt from criticism because he didn’t mean it. Would Chris Wallace or Shepard Smith or another ‘journalism-first journalist’ (and you could argue against that in Rather’s case) at a right-leaning media outlet be exempt if they said something similar? Absolutely not, and it would be a bigger story.

With due respect to Rather and his illustrious career in journalism, he admittedly has no idea what he’s talking about regarding what “we tweet, or post…under the guise of news.” His first sentence makes that clear: “I must confess that until recently I had no idea what Twitter was.”

Rather still has no idea.