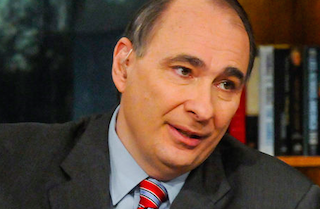 , took the former advisor to President Barack Obama to NPR’s Fresh Air on Tuesday, where he spoke of his time working on the 2008 and 2012 presidential campaigns as well as his experience within the White House over the last several years.

While Axelrod said he had always chosen to “deflect” questions about race while he was still working for President Obama, he decided it would finally be appropriate for him to share his opinions on the question of how race plays a role in criticism of the president.

Asked how much he believes “latent racism” affects “political, media or popular reactions” to Obama’s actions, Axelrod it’s “undeniable that race is an element in the opposition to the president.”

It was just this week that Rep. Mo Brooks (R-AL) said in an interview that Obama’s refusal to say “radical Islam” is “probably an unfortunate byproduct of the days when he was in a Muslim school.”

RELATED: Axelrod: ‘No One Got Under Barack’s Skin More than Maureen Dowd’

“This is undeniably part of people’s reaction to the notion of an African-American president and their discomfort with it,” Axelrod said, noting that this view “absolutely does not” represent the majority of the country. He added that Obama “felt” this discrimination but “didn’t complain about it” and “understood it was part of the deal.”

As for the question of whether Obama’s political team ever did polling on this issue, Axelrod said they did not because the people they focused on people “who were open to him and therefore less apt to express those types of attitudes.”