Dear People Leaving Your Huge Receipts Behind: We Get It, You Are Rich 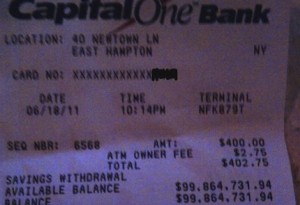 After the Bruins won the Stanley Cup, they headed over to Foxwoods Casino and dropped over $156,000 on booze. How do we know this? Because they took a picture of the receipt. Of course, every single one of them earns a lot more than that – by far, in most cases – and they’d just won a championship, so good on them. Boys will be boys.

Then on Tuesday, the Eagles’ DeSean Jackson and some friends went to a club in LA where they dropped over $10,000 in seventeen minutes – again, with the receipt to prove it. Magnums of Grey Goose and bottles of water are expensive at The Colony.

And yesterday, the piece-de-resistance: a receipt from an ATM showing a $99 million balance in a Capital One savings account. The owner of the receipt was eventually outed as hedge fund manager David Tepper, a guy who keeps a set of brass testicles in his office. (Get it? Because he’s got balls.) How exactly Tepper was outed remains a mystery. I’m sure he was terribly embarrassed by the revelation.

We get it, guys. You’re all rich. You’re getting pricey drinks and can’t even be bothered to earn interest on your tens of millions of dollars. Understood. Thanks for sharing.

The people I’ve mentioned all make way more than that.

Money buys things besides booze and online notoriety. The wealthy heir to a Chicago family was arrested when his speeding Porsche jumped a curb and killed two men. He avoided jail time by making payments of an unspecified amount to the men’s widows. Meanwhile, a homeless guy in Maine was arrested this week for using an outdoor plug to charge his cell phone. Justice may be blind, but she’s not a Socialist.

Americans love the idea that they too could ascend to the ranks of the wealthy. It’s the American dream – your savvy and hard work bring you to the upper echelon. But we have to come to grips that the upper echelon keeps steadily rising higher and higher into the clouds as we pick our way up rocky cliffs, gingerly testing our footing, all while boulders rain down on us from above.

Pre-emptively to the commenters who accuse me of fomenting class warfare: no point in my doing so. As Warren Buffett said, “There’s class warfare, all right, but it’s my class, the rich class, that’s making war – and we’re winning.” But that was in 2006. The war’s been over for a few years. We lost.

I’m not inciting class warfare – I’m just asking the victors to stop kicking sand in our faces. Please, sirs. If you don’t mind.

Or, at least, instead of just seeing your sloughed-off receipts – can I get one of those $6 bottles of water?