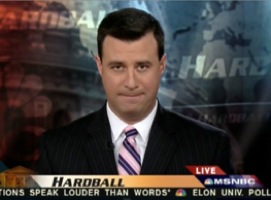 Yesterday we reported that David Shuster had been suspended indefinitely by his employer MSNBC, apparently in response to Shuster’s alleged dalliance with CNN. Last week it was revealed that he may have taped a pilot for the competing cable news network, which some have surmised was done in advance of his contract with MSNBC ending this year.

Shuster is not immune to controversy: earlier this year, he got in a remarkably heated back and forth with Internet mogul Andrew Breitbart, was suspended from using his Twitter account, and, a few years ago was suspended for two weeks in 2008 for his “pimped out” comment about Chelsea Clinton. Shuster didn’t just report the news – he made news too! (Which explains, to some degree, why he’s become a lightning rod in the opinion media landscape.)

However, the fact is that David Shuster was somehow in hot water with MSNBC because he shot a pilot for CNN (about a possible future gig) not only highlights the old-school relationships between networks and talent, but seems remarkably unfair. Mind you, had a test tape, audition or pilot been for air, of course, Shuster should have been toast in the eyes of MSNBC. But as far as we know, that didn’t happen.

Every day anchors and reporters meet with other networks to vaguely assess future opportunities. Same with their bosses. Of course they aren’t formally permitted to negotiate a deal until the end of their contract. But no one has yet suggested that Shuster, or his agent, actually negotiated a deal. Further, if that sort of clause were actually enforced? Well, there would suddenly be hordes of agents doing a whole lot of nothing. Instead, Shuster may have just been protecting himself. Looking at the way the network was responding to him, MSNBC very well might not have renewed his contract. And he would have been left unemployed (although, he may find himself there anyway.)

Think about the flipside. As Shuster’s contract with MSNBC comes to an end, the cable news network would have had no problem auditioning numerous replacement hosts and anchors for his spot. They could have shot plenty of tape, even produced pilots in advance of Shuster’s departure. It’s a smart, and somewhat preventive business practice. But somehow, by doing the very same thing, David Shuster is the MSNBC pariah that has earned a suspension from the network. Like Shuster or not, you have to feel for the guy, unless of course that CNN pilot becomes a show (which will make this all worth his trouble.)