Defending the IRS: MSNBC’s Support Of Obama, Once An Asset, Now Puts Network In A Losing Position

Defending the IRS: MSNBC’s Support Of Obama, Once An Asset, Now Puts Network In A Losing Position 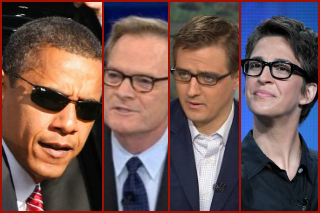 “Conservatives still want to change the subject to the fake, ginned up scandal they’ve been pushing month after month.” – Chris Hayes on Benghazi.

“So now they’re (Republicans are) viewing an actual real world abuse of power scandal (the IRS Scandal), not as its own outrage, but as a means of supporting their preexisting witch hunt on Benghazi, which they really struggled to turn into a scandal in large part because they themselves cannot seem to settle on what the scandal even is. It’s a cover-up. Just don’t ask what’s being covered up…” – Hayes on the IRS Scandal being used for political gain for Republicans on…Benghazi.

“Does this mean that the IRS is hereby forever neutered from doing what is, after all, the very important work of making sure that political fundraising groups are not making a laughingstock of the rules that are supposed to limit what they do? Will we ever really have an IRS doing that important work again, giving how badly they screwed up trying to do it over these past couple of years?” – Rachel Maddow on the IRS Scandal and its potential ramifications for the agency.

And so it goes at MSNBC. The formula worked in 2012 in turning Mitt Romney into Gordon Gekko while the network soared to its highest ratings ever. But that formula—part-attack Republicans, part-defend-the President at all costs—is a one-track record that the public—even some on the left—aren’t buying. And when the choice is to join the GOP in holding the President accountable with the same passion they did when taking on Bush 43, the captains of MSNBC primetime appear to be prepared to go down with the ship…if it means embracing that horrific alternative.

If ratings (those slightly-important indicators that ultimately pay the bills and allow network people to keep their jobs and hosts to keep their shows on the air) are any indication, Phil Griffin’s network has experienced arguably the worst six weeks of his tenure. If you recall, Griffin declared in March he would kick his friend Jeff Zucker’s “ass” in the ratings, all while overtaking Fox News—which has been number one for over a decade—within the calendar year.

At the time I commended Griffin for thinking big, but also cautioned him to be wary of Zucker in his rearview mirror. At that time, CNN was plodding along in third or fourth place (depending on what was going on with Jodi Arias and HLN). But then Boston happened and many viewers–particularly casual ones–turned to CNN. And after the terrorists were killed and captured, respectively, a funny thing happened: Audiences mostly liked what they saw on CNN and stuck around.

The result? HLN and CNN leapfrogged MSNBC in April in total viewers and the all-important 25-54 demo.

No matter. All cable networks have a bad month when breaking news or events help steer some views away. With Boston in the past, May would be the month MSNBC would rebound when things returned to normal, whatever that is.

Arias and Cleveland kidnappings helped Turner Broadcasting’s CNN and HLN continue its momentum of recent weeks. Arias, of course, is the (demented) gift that keeps on giving for HLN, while CNN wisely dedicated resources to LeBron’s former home to cover the kidnapping story extensively. And of course, Fox might as well open a bureau in Benghazi in appreciation for all of the mileage that story has provided the network in a non-election year.

So the fourth place finishes have continued for MSNBC, which (as also noted in this space recently) is a network without a narrative during said non-election year.

In short, Phil Griffin’s network revolves around one thing: Politics. And that world just ain’t that compelling unless there’s ballot box somewhere in the near future.

MSNBC is also built on pointing out the hypocrisy and/or evil nature of the Republican Party and Fox News, two cornerstones of its content.

But now it is President Obama and his promise to be a completely transparent administration that is being gleefully exposed as hypocritical by the GOP and Fox.

If Nate Silver is the next Nostradamus, the President is already a lame-duck. Silver says Democrats have little chance to take back the house in 2014. No House control, no ability for a President—whose credibility has taken a toll over the past month for which it will be difficult to recover from—to advance anything grandiose in a second term.

In other words, the President is (to quote Tom Cruise in The Firm): “…like a ship carrying a cargo that will never reach any port”.

On the U.S.S. Obama is MSNBC. And in making a run at Fox and in an effort to distance itself from CNN, they simply rearranged the deck chairs by doing things like moving Chris Hayes from weekday mornings to primetime. The result has been nothing short of disastrous, as he now trails The O’Reilly Factor by a 7-to-1 margin while failing to get 500,000 viewers per night (Keith Olbermann, conversely, routinely generated over 1.2 million viewers before being asked to leave).

The only hope, of course, is Hillary and the Clinton for President 2.0 2016 campaign. It was somehow the lead story on the Chris Matthews Show on Sunday. All complete with fat jokes about Chris Christie (lather, rinse, repeat) from the host, who ain’t exactly Calista Flockhart himself…

Nope…it’s all about an election 42 months away.

Because it’s a challenge to defend the President these days.

Or Lean Forward with Hillary to 2016.