Dem Pollster Shocked to Find No Racism in Tea Partiers, So They Invent Some

Dem Pollster Shocked to Find No Racism in Tea Partiers, So They Invent Some

Rothman: Dem Pollster Shocked to Find No Racism in Tea Partiers, So They Invent Some
Twitter share button 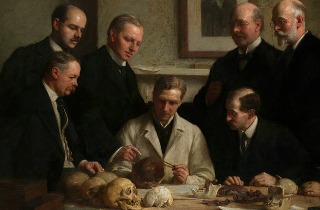 The Democratic pollster Democracy Corps, commissioning research from Greenberg Quinlan Rosner, recently dug into that foreign species commonly referred to as “the conservative voter.” In a dispatch that reads like the curious field notes Charles Darwin scribbled while observing the natural wonders of the Galapagos, the Democratic pollsters have found that the family Republican is made up of a variety of genera, including moderates, tea partiers and socially conservative evangelicals.

Perhaps unsurprisingly, the pollsters discovered that these factions are distinct and not especially friendly towards one another; but the report is not without surprising findings.

The top of that list is the discovery that the majority of Republican voters are fed up with litigating social issues via the electoral process. A wave of pragmatism is overtaking the GOP’s subgroups, setting up a collision with the last remaining holdouts within the GOP who view politics as the last weapon in a dwindling arsenal aimed at halting what they view as a debasing of the culture.

“We know that Evangelicals are the largest bloc in the base, with the Tea Party very strong as
Well,” the memo reads. They feign shock at the notion that Republicans view President Barack Obama as a “liar” and a “manipulator,” two designations that the majority of American voters would agree with but to which the Democratic base’s Pavlovian response is to point and shriek “racism.”

Indeed, the pollsters even confess that they “expected” to find more racism among Republican voters. “We expected that in this comfortable setting or in their private written notes, some would make a racial reference or racist slur when talking about the African American President,” they confess. “None did.”

But this response by the voters they surveyed is viewed by Democracy Corps pollsters more as a clever evolutionary response to a history of predation. The Republican voter, the pollsters declare, harbors racial consciousness that is only masked by an effective camouflage:

They know that is deeply non-PC and are conscious about how they are perceived. But focusing on that misses how central is race to the worldview of Republican voters. They have an acute sense that they are white in a country that is becoming increasingly “minority,” and their party is getting whooped by a Democratic Party that uses big government programs that benefit mostly minorities, create dependency and a new electoral majority. Barack Obama and Obamacare is a racial flashpoint for many Evangelical and Tea Party voters.

The capable naturalists at Democracy Corps are trained to recognize even the latent, recessive racism lingering deep within the Republican genome. Like the human coccyx, the vestigial prejudice in the GOP voter is betrayed when the subject is scrutinized by those with trained eyes.

Looking past the obligatory nods to partisan shibboleths contained within this memo, however, are a series of interesting nuggets that contribute to the political debate. “Evangelicals who feel most threatened by trends embrace the Tea Party because they are the ones who are fighting back,” the memo reads. “They are very in tune politically, but the Tea Party base is very libertarian and not very interested in fighting gay marriage.”

This spells trouble on the horizon. The tense truce between socially conservative evangelicals and tea partiers, two groups which largely agree on philosophy but greatly differ over tactics, will certainly find themselves again at odds when the Republican Party’s presidential primary process heats up after the midterm elections. The clash may, however, come sooner.

As National Journal‘s Charlie Cook observes, Sen. Harry Reid’s (D-NV) best shot at maintaining his majority in the upper chamber of Congress by scuttling a small budget deal and forcing House Speaker John Boehner (R-OH) to take an unpalatable measure back to his members in order to force another shutdown. This cynical tactic is among the last tools in the toolshed for Democrats, and it just might work.

In the same way, Democrats can shatter this fragile truce between purist evangelicals and pragmatic tea partiers by forcing the issue of national gay marriage legislation. It would tear the country apart, but with the country will go the GOP.