Dem Rep. Barbara Lee Fires Back at O’Reilly for Calling Her a ‘Race Hustler’ 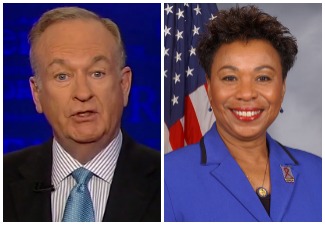 Congressman Paul Ryan came under fire this week for a remark about inner city culture that set off accusations of racism, including a condemnation from Congresswoman Barbara Lee that Ryan’s words were “deeply offensive” as well as “statistically inaccurate.” Bill O’Reilly found Lee’s response to be beyond absurd, and twice this week referred to her as a “race hustler.”

The first time was on Monday, when he read Lee’s statement calling Ryan’s words a “thinly veiled racial attack” and said, “Ms. Lee, by the way, a notorious race hustler.” The second was when Ryan actually appeared on The Factor Tuesday night and O’Reilly told him that “hustlers” like Lee have no interest in the real problems the black community faces.

“These race hustlers make a big living, and they get voted into office, by portraying their constituents as victims, and it’s all your fault and my fault, it’s the rich people’s fault, it’s the Republicans’ fault… So, no matter what you say, congressman, you’re gonna be branded, because the race hustlers don’t want to solve the problem.”

Lee issued a statement today firing back at O’Reilly for using “divisive” language. Here’s part of the full statement:

“Unfortunately we’ve come to expect language like “welfare queens,” “food stamp president,” and now “race hustlers” from the right wing and Mr. O’Reilly. It is disgusting and divisive and should never be accepted in our national discourse.

“For us to achieve the American dream for all, we must engage in this conversation that has been sparked about race and poverty, even if it is difficult for some. Racial discrimination, poverty, and income inequality remain issues that must be debated and addressed, and these kinds of ‘code words’ only get in the way of solving the real problems.”

You can watch the O’Reilly clips below, via Fox News: