Dem State Rep.: Women Might ‘Pop A Round’ If They Think They’re Being Raped, So We Must Ban Concealed Carry 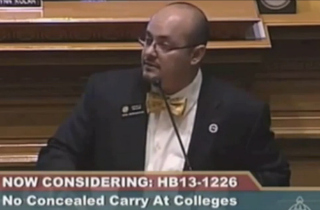 If you’re a woman who fears she’s going to be raped… you might be wrong. So said Colorado State Representative Joe Salazar (D-Thornton).

Arguing in favor of House Bill 13-1226 to prohibit concealed carry of firearms on Colorado college campuses, Salazar rebuked critics who said the law would remove a female college student’s ability to “level the field” and legally protect herself from potential attackers.

I’m sorry if I offended anyone. That was absolutely not my intention. We were having a public policy debate on whether or not guns makes people safer on campus. I don’t believe they do. That was the point I was trying to make. If anyone thinks I’m not sensitive to the dangers women face, they’re wrong.

I am a husband and father of two beautiful girls, and I’ve spent the last decade defending women’s rights as a civil rights attorney. Again, I’m deeply sorry if I offended anyone with my comments.