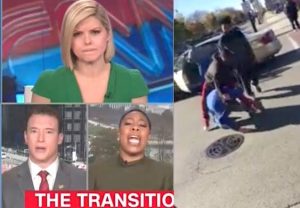 Former press secretary to Bernie Sanders and Democratic strategist Symone Sanders mocked and dismissed a Donald Trump supporter who was beat up by a Chicago mob on CNN Monday because he was white.

Sanders took on Trump for his comments Sunday that his supporters should stop committing hate crimes in his name, saying he needed to go further. “The audacity of privileged white people to sit on national television and question if hate crimes are happening, to just flippantly say ‘stop it, it’s not okay,’ and not put any action behind those words, it’s appalling to me. It’s actually appalling.”

Trump supporter Carl Higbie retorted that there was violence on both sides, and that Hillary Clinton and Barack Obama hadn’t bothered to denounce the violence at anti-Trump rallies. “I’m sorry, hate crimes and protesting are not the same things…” Sanders responded. “A hate crime is a crime that is committed against somebody because of their religion, because of what they look like, because of their sexual orientation. That’s not the same thing as protesting.”

“What do you say to the people who dragged a poor white guy out of a car and beat him?” asked Higbie.

You can watch the mob assault below:

Sanders didn’t seem so sure of that. “There has never been an acceptable form of protest…” she responded. “We can’t call for people to be peaceful when the rhetoric that has been used is not peaceful, when people don’t feel peaceful in their home.”