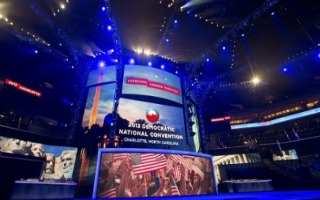 This classic line sprang to mind last night as I watched a parade of charismatic Democrats, one after another, take the stage in Charlotte to sell the status quo to Americans. The abortion rights theme having been pounded into the ground in the first two nights of the Democratic National Convention, the speakers turned to the state of the economy — which, surprise, they said was not doing all that poorly.

Manufacturing, after decades of realignment owing to a new era of global competitiveness and free trade, is back on the rise in America. Opportunity and equal pay are now guaranteed to millions of Americans who had previously been denied their fair shot. Oh, and, that automobile industry? That’s back and better than ever. You remember, don’t you, just how bad things were in 2008, right?

The pitch and tone of the speakers, as well as the soggy-eyed expressions on the faces of the loyal Democrats in attendance, was nearly enough to convince you that maybe things were not as bad as folks say they are. But, just as in Hicks’ joke, the America that Democrats were describing last night does not look like the America outside your door.

Friday’s dismal August jobs and unemployment reports cemented the notion for all who were even slightly apprehensive about the Democrats messaging on their final convention night that they were being sold something.

The unemployment rate dropped two tenths of one point, not because people got jobs, but because another 365,000 simply gave up looking for one. July’s slightly hopeful report showing an increase in jobs and a boost in the unemployment rate as more workers enter the workforce proved to be a mirage. More than 80 million Americans are out of the work force. Wages are flat, gaining only 1.7 percent over the last year.

The Democrats did are remarkable job of telling the American people to ignore their lying eyes. When what’s right in front of your face is downright scary, there will certainly be some who opt to take that blue pill and go back to sleep. The antithesis of the hope of 2008, today Democrats are asking you to believe that the present state of affairs is as good as it gets. No one could do better.

Last night proved that the Democrats have not one solution for the problem of stagnant economic growth. From 2009 – 2010 every economic arrow in the Keynesian quiver was loosed on the nation. Nearly $1 trillion of stimulus funds were spent, “roads and bridges” committed to, housing and automotive purchasing pushed forward with tax incentives. All that economic activity left little in the way of sustained growth.

Democrats are hoping that a chorus of voices telling Americans that this is as good as it gets will convince Americans to give the governing party one last shot.

In 2008, the Democrats offered hope and voters chose hope. This time around, Democrats tell Americans to accept their lot. Now, it is the Republicans that are offering hope and change. We will see in November if that is as effective a message in 2012 as it was last time around.