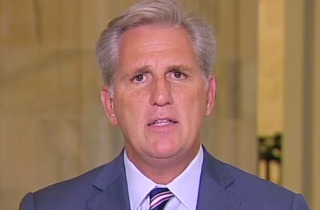 Kevin McCarthy, John Boehner‘s possible successor as Speaker of the House, appeared with Sean Hannity last night and faced tough questions over concerns with the ineffectiveness of Republican leadership.

McCarthy promised that he would be a speaker with a “strategy to fight and win.”

“Everybody thought Hillary Clinton was unbeatable, right?” he said. “But we put together a Benghazi special committee, a select committee. What are her numbers today? Her numbers are dropping. Why? Because she’s untrustable.”

Now, naturally, the connection between the presidential race and the Benghazi investigation didn’t go over well with Democrats.

Congressman Elijah Cummings, the ranking member on the select committee, decried how “shameful” it is that Republicans “used this tragedy and the deaths of our fellow Americans for political gain.”

And, of course, the Clinton campaign pounced too:

Brian Fallon, a spokesman for Mrs. Clinton, called Mr. McCarthy’s remarks “a damning display of honesty by the possible next speaker of the House. Kevin McCarthy just confessed that the committee set up to look into the deaths of four brave Americans at Benghazi is a taxpayer-funded sham. This confirms Americans’ worst suspicions about what goes on in Washington.”

Watch McCarthy’s Hannity interview above (the relevant part starts at the 4-minute mark), via Fox News.