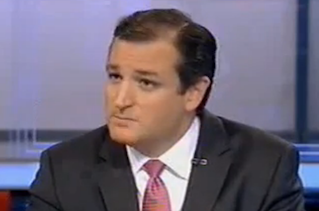 Speaking with a reporters after this Friday meeting at the White House, Sen. Ted Cruz (R-TX) revealed some details about his conversation with President Obama over the Affordable Care Act and the government shutdown.

POLITICO reports that Cruz “confronted” the president, telling him that any deal to reopen the federal government must be accompanied by “substantial” changes to Obamacare. According to the D.C. publication, Cruz did not use the word “defund” when describing his aspirations for the healthcare law.

“I told the president exactly the same thing I have told you here today: That we need to work together and fund the government and at the same time provide substantial relief to the millions of people who are hurting because of Obamacare, who are losing their jobs, being forced into part-time work and losing their health insurance,” Cruz said, according to POLITICO. “If the outcome doesn’t impact people who are struggling, who are hurting because of Obamacare, then I don’t think it would be a good outcome.”

Cruz told reporters he is “glad” the president is finally having discussions with the opposition — “That is an improvement,” he said — but “at the end of the day, the president still said he wouldn’t negotiate.”

“We began talking, that was good today,” the Texan senator added. “But he continued to maintain that he will not negotiate or compromise on anything. And if that is the position, that’s not going to lead to a resolution.”