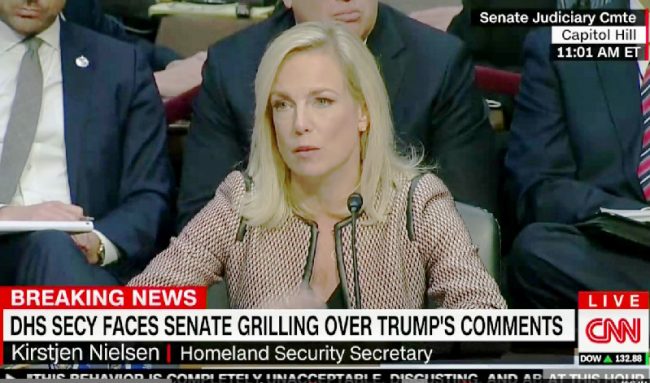 You know the Trump administration’s policy of separating families at the border, that the president himself blamed on Democrats? Department of Homeland Security Secretary Kirstjen Nielsen declared on Sunday that policy does not exist.

In a series of tweets, issued as the public backlash to the separation of migrant children from their families at the southern border intensifies, Nielsen criticized the “misreporting” on the policy.

“This misreporting by Members, press & advocacy groups must stop,” Nielsen wrote. “It is irresponsible and unproductive. As I have said many times before, if you are seeking asylum for your family, there is no reason to break the law and illegally cross between ports of entry.”

And then, with a bizarrely Sean Spicerian flourish, she added: “We do not have a policy of separating families at the border. Period.”

We do not have a policy of separating families at the border. Period.

Nielsen went on to explain that a child will only be separated from its family “if the adult has broken a law.” What she failed to mention: Attorney General Jeff Sessions‘ “zero tolerance” border policy, announced in May, held that all immigrants who cross the border illegally will be charged with a crime.

For those seeking asylum at ports of entry, we have continued the policy from previous Administrations and will only separate if the child is in danger, there is no custodial relationship between ‘family’ members, or if the adult has broken a law.

Nielsen’s It also apparently contradicts this Trump tweet, in which he accused Democrats of “forcing the breakup of families at the Border”:

The Democrats are forcing the breakup of families at the Border with their horrible and cruel legislative agenda. Any Immigration Bill MUST HAVE full funding for the Wall, end Catch & Release, Visa Lottery and Chain, and go to Merit Based Immigration. Go for it! WIN!