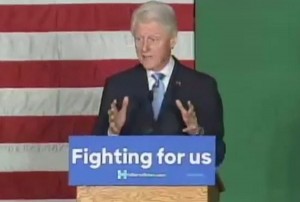 Former President and potential future First Dude Bill Clinton landed himself in a bit of hot water this week when he allegedly disparaged President Obama’ s time in office by making a reference to the “awful legacy of the last eight years.” Did Clinton really slam Obama’s time in office, or was there some bit of context that the media, anxious to sow division among Democrats, left out in order to make it seem worse than it was?

The thing is, we’ve heard this song before. Last month, some pro-Bernie Sanders producer at MSNBC cut off a Bill Clinton quote in mid-sentence in order to make the same charge, and in fact, did it during the same “change-maker”  riff that got Bubba in trouble this time. Here’s a slightly longer version of those remarks from Monday, including a snippet of the “change-maker” bit from a few minutes earlier in the speech:

It’s fair to include that line about making Washington, DC run more like a community college and less like a food fight, even though it comes a bit earlier in the speech, because it connects thematically, and it might help exonerate Bill. After the uproar over the remarks, Hillary Clinton’s campaign put out a statement clarifying what President Clinton had said:

“When Republicans controlled the White House, their trickle-down approach drove our economy to the brink of a collapse. After President Obama was elected, Republicans made it their number one goal to block him at every turn,” spokesman Angel Urena said in a statement. “That unprecedented obstruction these last eight years is their legacy, and the American people should reject it by electing Hillary Clinton to build on President Obama’s success so we can all grow and succeed together.”

That “food fight” line, though, is just an oblique reference to general Washington dysfunction, not Republican obstructionism. From the way he spoke toward the end of the speech, though, it seemed evident that he must have made reference to the past eight years somewhere else in the speech, a chunk of context that the media failed to connect.

As it turns out, there is a section at the beginning of the speech that directly connects with the “awful legacy” part toward the end. Clinton starts out by reusing the compliment that President Obama doesn’t “get the credit he deserves” for creating almost as many jobs as Bill did and delivering health care to 90% of Americans, then gave a one-minute summary of the President’s State of the Union address and explained that millions of Americans felt “left out of the picture” Obama painted. And that’s when he blamed Republican obstructionism:

The problem with that beautiful picture of the future is that today, most Americans can stare at that picture, and they cannot find themselves in it to save their lives. Why? Because at the time of the crash eight years ago, most Americans were living on less than they were the last day I was in office. Now, since the crash, 80% of the American people have still not gotten a raise. And that’s entirely predictable. For 400 years, every financial crash takes about ten years to get over. We beat the timetable on the jobs, we’ re lagging on the incomes. And there are lots of reasons for that.

Wait, what? Referencing the dotcom-aided Bill Clinton nineties as a benchmark is cool, but “figuring out” how Obama left everybody out of the picture is “re-litigating the past?” To the casual observer, Clinton appears to be telling President Obama, essentially, “Close, but no cigar.”

Throughout the entire speech, in fact, Clinton never mentions the Republicans’ historical obstruction of President Obama, even though he had ample opportunity to do so. Part of that is, I think, a function of ego, of the big dog protecting his own territory as Best President Ever, but more to the point, neither he nor Hillary has a convincing enough reason for anyone to believe that the Republicans will treat Hillary any differently. Elsewhere in the speech, he talks about how Hillary worked with Republicans on several non-controversial issues in order to make the case that she can get things done, but evoking the massive resistance to Obama would badly undercut that. They accused Obama of being born somewhere else; they’ ve been accusing Bill and Hillary of being murderers for going on twenty years.

Hillary might now be wishing Bill had referenced Republican obstructionism, and maybe he really did mean to, but the facts say otherwise. He didn’t, and in that one section, he conspicuously made a point not to. You can quibble over whether saying Obama did pretty good but not good enough is “disparaging,” but as it was delivered, this speech was about a contrast with Barack Obama, not Republicans.