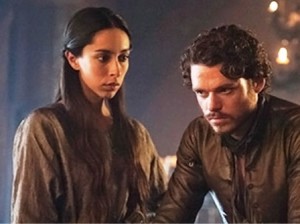 Game of Thrones has been mentioned in this space before as my favorite show on television.

Sure, half the time—like the rest of America—I’ve been utterly confused, wishing characters wore name tags or had VH-1 pop-up bubbles explain who they were and what their role represented. But in the end, the acting is superb, the visuals stunning and the tone of every scene always feeling so damn…important.

But the episode just witnessed (“The Rains of Castamere”)…the show that will go down as the most-talked-about-on-Twitter episode in the history of the program…went way, way (way) too far. And that’s saying a lot considering everything we’ve seen on the hit HBO original series to this point, which has included plenty of torture, beheadings and other cringe-worthy items.

Having said that, the following declaration comes without ambiguity: I am done with Thrones. Never again can I watch another episode. And with Entourage long gone and Curb Your Enthusiasm stuck in some kind of abyss, there’s really no need to continue my subscription, particularly after the offensive and appalling display the show just put on…primarily concerning one female character.

So what was different about Sunday night’s episode? If you haven’t seen it yet, it might be time to read another one of the fine columns Mediaite has to offer right about now.

But if you have, you know exactly where I’m going with this.

That said, there are two hard and fast rules every television show and movie should live by:

Thrones blatantly broke both of those rules.

And in regards to the latter, in patently-disturbing fashion.

The murder of Robb Stark’s wolf has actually been done on the show before with another wolf from the same family. In Season 1, Ned Stark was forced to do so by the mostly-evil Lannisters after one wolf—in protecting one of Ned’s daughters–bit the cartoonish (but twisted and not-yet-King) Joffrey. So we’ll let that slide…barely (this coming from the guy who owns a Westie and DVRs The Dog Whisperer).

On to rule #2, as some of you know, the last ten minutes of Sunday’s episode was as shocking as anything seen in television history as far as fictional drama goes (Fonzie clearing the shark in a leather jacket despite zero waterskiing experience and J.R. taking a bullet being others that come to mind). The noble and honorable Starks, Rob and his mother Catelyn, betrayed and ambushed in what became a red wedding massacre, their throats slit from ear to ear.

But it was the brutal killing of the pregnant Telisa –Robb’s wife—by a soldier who repeatedly stabbed her in the stomach that took the feeling well beyond shock.

Sorry HBO, that was far too brutal, far too much.

And it wasn’t just a quick shot and cutaway of Telisa and her unborn child’s savagely violent death. Viewers got to see a wounded Robb Stark touch her bloody womb, knowing his child and wife had just been murdered, before he was given the aforementioned final sendoff.

According to the books Game of Thrones is based on, Telisa and her unborn baby are not supposed to be slaughtered in this scene. In fact, she’s not even supposed to even be there at all. Again, don’t bother arguing that the show is only following the book, because the attack on Telisa never happens at the Red Wedding.

But for HBO, nothing is ever shocking enough, no line too far to be crossed. So if it means ignoring the book, taking out a pregnant chick and doing so in a way that will depress sane viewers for the next 17 months strictly for shock value, so be it.

Murder a defenseless animal that doesn’t look much different from Lassie?

Murder a pregnant woman by going after a baby in the womb first?

A cable network that just lost one subscriber for good.