Do Not Blame the ‘Media’ for Trump’s Nomination. Blame His Supporters.
Opinion
Trump Mania

Do Not Blame the ‘Media’ for Trump’s Nomination. Blame His Supporters. 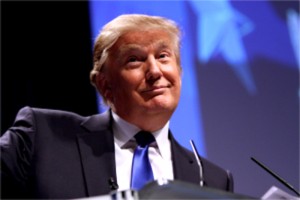 This is an edited version of a post that originally appeared on this site in February.

The morning after a vigorous pre-Super Tuesday debate performance in February, then-GOP golden boy Sen. Marco Rubio appeared on CBS and quickly blamed the media for Donald Trump‘s ascendance, saying that the once-improbable, now-very-plausible GOP candidate was “being pumped up because many in the media with a bias know that he’ll be easy to beat in a general election.”

It’s a banal and familiar argument from Republican candidates who ate Trump’s dust in the polls, then at the ballot, before finally and inevitably withdrawing.

Back in August Sen. Rand Paul — one of the first to take Trump on directly, and pay the price for it — attributed Trump’s high standing in the polls to the all-too-common scapegoat: “You have to admit that there’s been an extraordinary amount of attention paid to one person,” he said, “and I think anybody’s numbers would rise with that amount of attention.” Paul’s long gone, and the race has contracted to a five-man contest, but they’re still singing the same tune.

And it’s not just the candidates. Media watchdog groups on both the left and the right have frustratedly noted that Trump seems to receive the lion’s share of media attention. A report in February even tried to lay the blame for Trump’s success squarely on the shoulders of CNN’s Jeff Zucker.

It’s long past time for media critics, amateur and professional, to stop focusing on the messenger and start focusing on the message. As much as we in media would like to believe we can lead lemmings to the edge, the blame for the mogul’s meteoric rise belongs solely with those people actually responsible: the people who vote for him.

If you think Trump is a bigot, a xenophobe, or a carnival barker more fit to host a reality show than to be Commander-in-Chief, if you think all the attention and endorsements Trump has received — not to mention votes and delegates — are undeserved and should have been distributed among more qualified Republican candidates, then start blaming the supporters who embrace him — and go to the polls — with such fervent, thirsty enthusiasm.

I won’t pretend the media hasn’t given far too much airtime to Trump, and that he hasn’t benefited from it. It has, and he has. And pundits and anchors have probably piddled untold hours straining to give mindful consideration to his mindless remarks, when they could have been talking about far more substantive matters and candidates.

But let’s not forget that Donald Trump was a household name going into this election, so the media can hardly be blamed for making his name ubiquitous. And his presence certainly helped draw viewers to Republican debates in record numbers. So if the reality TV star stole some attention away from other candidates, he also lured far more viewers to watch a guy they’d probably never heard of named John Kasich make his case. It’s a cop out to pretend that Trump’s fanbase is just made up of drones punching their chad and waving their little red hats simply because of the volume of media coverage bestowed upon their candidate. That way of thinking gives the media far too much credit and lets his supporters far too easily off the hook.

Does watching a candidate say outrageous things over and over and over again endear you to him? Well, it depends who you are. If you thought a ban on Muslims entering the country until we “figure out what’s going on,” sounded like a bad idea the first time you heard it, chances are the nonstop media coverage of that “proposal” did little to change your mind. So it works both ways.

A presidential candidate pronouncing something so radical and outrageous is newsworthy and media outlets would be remiss if they didn’t make sure everyone tuning in or stopping by their home page wasn’t duly informed of exactly what Trump had said. Like it or not, a political neophyte coming down his brass-plated escalator from out of nowhere, violating every rule of political gravity, and wreaking havoc in one of our two major political parties — that is a major, ongoing story. But it’s his often frightening message to which we should credit his success, not the frequency with which it is broadcast.

Listen to the boos when Trump directs his ire to the pen housing the press corps at his rallies — and try to convince me his fans care deeply about media coverage. (Or, for that matter, ask Jeb Bush how useful mountains of airtime are if there’s nothing in your message to win people over.)

I don’t hear anybody blaming the media for Bernie Sanders‘s unexpected surge. Sanders, who also rode a groundswell of populist support to mount a credible challenge to his party’s frontrunner, did not have the benefit of much coverage early in the race. I personally would have liked for the three major news networks to cover Sanders’s bridge-building speech at Liberty University with the same breathless intensity with which they herald, broadcast, and re-cap any given Trump rally. Its not an apples-to-apples comparison, but like Trump, Sanders had a powerful message that resonated with the marginalized and those fed up with a certain politics as usual.

So whether you love or hate the things Trump has said, it cannot be denied that you’ve had ample opportunity to make an informed decision about where you come down on The Donald based on hearing his proclamations straight from the horse’s mouth. And if the media deserves blame for his popularity, surely it deserves credit for his titanic unfavorables.

So criticize Trump’s message, from the right or left, if you so choose but please stop excoriating us in the media and start pointing the point the finger of blame at at those really responsible: Republican voters.