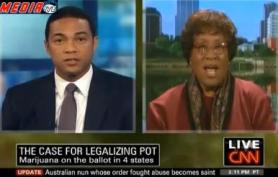 Marijuana legalization has become a major election issue this year, and is on the ballot in South Dakota, Oregon, Arizona and, most notably, California.

CNN’s Don Lemon had on former U.S. surgeon general under Pres. Bill Clinton, Joycelyn Elders, and asked her a unique, very personal question: would you smoke weed if it was legal?

Elders was quoted in a New York Times story over the weekend, saying, “I think we consume far more dangerous drugs that are legal: cigarette smoking, nicotine and alcohol.” With Lemon, she said marijuana should be legal “for adults,” should be taxed and it should be “illegal to sell to children.”

Then this exchange happened:

It seems odd for a news anchor to ask a marijuana legalization advocate whether she, personally, would smoke it if it was legal (especially someone who is, you know, 77-years-old). But the issue itself has been a major topic on CNN this election cycle. “Marijuana” has been mentioned 114 times on CNN just in October, according to TV Eyes. FNC has mentioned it a lot as well, at 81 times, and there have been 64 mentions on MSNBC (but that includes the doc block shows also).

But the issue itself is less one of left vs. right as it is generational. In the same NYT story that quoted Elders, Adam Nagourney reports the Obama administration’s Justice Department, “intends to prosecute marijuana laws in California aggressively even if state voters approve an initiative on the Nov. 2 ballot to legalize the drug.” If state’s do legalize marijuana, it will likely be because of younger generations and not necessarily overwhelming Democratic (or Libertarian-leaning conservative) support.

One other note: check out Elders’ views on a “sexually healthy society.” And check out the video below, from CNN: