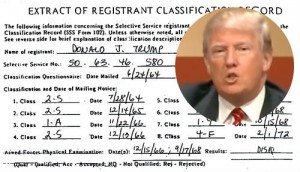 In case you hadn’t noticed, Donald Trump is not having a very good day. During a talk at the Family Leadership Summit, the 2016 GOP hopeful launched a tirade of verbal garbage at Arizona Sen. John McCain, past GOP presidential candidate and a veteran of the Vietnam War:

“He’s a war hero ’cause he was captured. I like people that weren’t captured.”

While there is an historical precedent for Trump’s feud with McCain (as there is for almost every fight the businessman gets himself into), his stance on Saturday — as well as his refusal to apologize — have turned the majority of conservatives against the would-be Republican President of the United States. Plus, there’s the matter of Trump’s own record of multiple deferments.

Back in 2011, when Trump first considered a run at the White House before the 2012 election between President Barack Obama and former Massachusetts Gov. Mitt Romney, The Smoking Gun shredded his ambiguous story about having a “high draft number” to shreds when they found and published his multiple deferment records. Turns out Trump received four student deferments and one medical release from serving in the military at the time, according to records and not his memory of the time:

In fact, the December 1969 draft lottery occurred about 18 months after Trump graduated from the University of Pennsylvania, where he studied business at the Wharton School. So, while claiming that he would “never forget” being at Wharton watching the draft numbers being drawn, the 64-year-old Trump seems to have misremembered, as candidates are fond of saying.

Almost immediately after Trump’s McCain gaff on Saturday, reporters pointed out the presidential candidates own lack of service and his record of multiple draft deferments. However, as vocal as Trump was about how little he thought of McCain’s status as a military veteran and career politician, he had little to say about himself, according to the Washington Post:

Asked why he didn’t serve, Trump said, “I had student deferments and ultimately had a medical deferment because of my feet. I had a bone spur.” But Trump said he did not recall which foot was injured and instructed reporters to look up his records.

Of course, Trump didn’t stop there. Instead of letting journalists dwell any longer on his McCain remarks or his deferment records, the candidate decided to attack the Vietnam War: