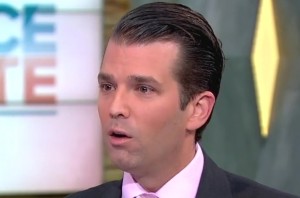 Despite being tapped by his father Donald Trump to run his business and charitable efforts while in office, Donald Trump Jr. was reportedly involved in the Trump transition team’s interview process for a cabinet position.

So reports Politico Wednesday morning. “The lines between the Trump administration and Trump Inc. are already becoming blurred…” writes the Playbook team. “The president elect’s eldest son, was involved with the interview process for Interior secretary, according to sources familiar with the discussions.”

“He sat in on interviews, and made calls to candidates, according to sources familiar with the process. Don Jr. is known as an avid outdoorsman, which is why he might have an interest in the next Interior secretary,” they continued.

Trump Jr.’s involvement is sure to be controversial given the fact that his father has already announced that he and his brother Eric Trump are supposed to be the running the family business during his administration. Trump Sr. insists that divesting from his business is unnecessary, and that handing it off to his sons is enough to avoid any conflicts of interest.

Even though I am not mandated by law to do so, I will be leaving my busineses before January 20th so that I can focus full time on the……

Presidency. Two of my children, Don and Eric, plus executives, will manage them. No new deals will be done during my term(s) in office.

It’s worth noting that Trump’s general election opponent Hillary Clinton was similarly criticized during the 2016 election when it was revealed that State Department employees were involved in hiring process at the Clinton Foundation.