Donald Trump Just Admitted He Has No Plan For Defeating ISIS 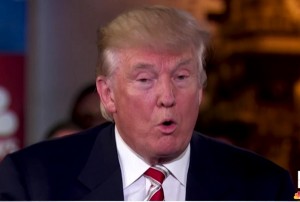 Viewers who tuned in for MSNBC’s “Commander-in-Chief Forum” were treated to that most revealing of political moments, as Republican presidential nominee Donald Trump slipped up and accidentally told the truth. When host and moderator Matt Lauer pressed Trump on his ridiculous and longstanding claim that he has a secret plan to quickly defeat ISIS, but he can’t discuss any of that plan at all, Trump made it clear to anyone who was paying any attention at all that there is no such plan (emphasis mine):

Lauer: So, is the plan you’ve been hiding this whole time asking someone else for their plan?

Trump: No. But when I do come up with a plan that I like, and that perhaps agrees with mine — or maybe doesn’t — I may love what the generals come back with…

Lauer: But you have your own plan?

Trump: I have a plan, but I don’t wanna…

But you really do have a girlfriend who lives in Canada, and we just can’t meet her because she’s in the space program?

As anyone familiar with the English language will tell you, if someone already has a plan, they can’t them “come up with” a plan. Now, there’s a case to be made that Trump really does have a plan, and just accidentally said he would “come up with” a plan to compare with that of the generals, except of course he doesn’t have a fricking plan! Even Trump, with this unmitigated slip-up, can’t believe we’re all still pretending any of this is real. The premise alone is self-evidently false. If Trump really knew how to defeat ISIS since before last June and kept it to himself, that would make him a multiple mass murderer!

The thing is, you can tell by the way Lauer followed up that he knows Trump doesn’t have his own plan, but instead lets Trump correct to the same absurd explanation that Trump’s been giving all along about his girlfriend in Canada. Maybe she has a plan to defeat ISIS.