Don’t Tell His Cult, But Trump Got Owned By Putin
Opinion

Don’t Tell His Cult, But Trump Got Owned By Putin 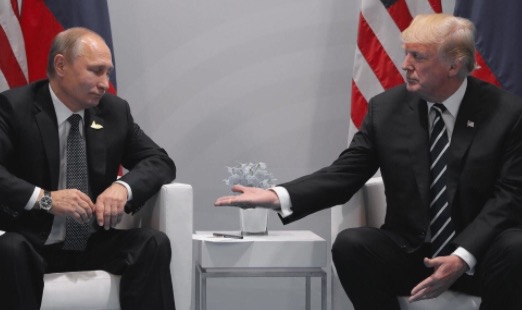 While I am an outspoken conservative critic of President Trump, I sincerely try to keep an open mind about the things that he does or says, and earnestly hope that he does the best for our country that he can. I did not want him to get the worst of his first meeting with Russian leader Vladimir Putin, but the evidence is overwhelming that, unfortunately, he did. In fact, he got owned.

The first strong sign that this sad result was inevitable were the reports that United States officials (who had been left out of the meeting limited to just two people and a translator on each side) desperately, and unsuccessfully, commissioned Melania Trump to try to break up the meeting when it went well past its scheduled duration. Whether you are in a fight, or making love, if your own wife wants it to stop, that’s a really bad sign.

This bizarre episode had remarkable similarities to the scene in the movie Rocky IV where the trainer (U.S. officials) for Apollo Creed (Trump) screams “Throw the damn towel!” at Rocky (Melania) in an effort to end the fight just before Ivan Drago (Putin) delivers the death blow. Hopefully, the ultimate ramifications won’t be nearly as dramatic, but someday they might be.

The biggest story coming out of the summit was that Trump had chided (too strong a term?) Putin about his meddling in the 2016 election, but Putin immediately denied it ever even happened. Putin is claiming that Trump accepted him at his (extremely dubious) word, and the pushback from the White House (and even from Russia hawk Nikki Haley) has been so meek as to effectively accept that this absurd reality is true. The fact that there are no plans for Russia to be punished by Trump for what they did is the ultimate proof that Putin is essentially telling the truth.

I realize that the Trump presidency has both desensitized us to insanity and set the bar so low for what is acceptable that a well-behaved child could easily surmount them, but this development is truly striking and beyond outrageous. Let’s be clear, the best case scenario here is that the President of the United States gave Russia the impression that he believes them over the overwhelming evidence provided to him by the intelligence agencies of his own country.

Let that one sink in for a moment.

We obviously don’t know what exactly was said, but reading between the lines here is about as difficult as discerning that when your wife tells you there is “nothing” wrong that there probably is something very much awry. Simply ignoring this reality is not going to make it go away.

It almost isn’t that important whether Trump literally told Putin, “Hey, no worries, I believe you.” What does undoubtedly matter, however, is that Russia felt so comfortable making this claim publicly, and that the White House didn’t even have the gumption to credibly contradict it. This means that, for all intents and purposes, in a world where perception is reality, this narrative is now accepted as truth, and Putin has won a massive victory on multiple fronts.

Putting aside the implications of Putin establishing himself as the Alpha to Trump’s Beta has for the future of US/Russia interaction, I find WHY Trump got so easily schooled to be the most interesting aspect of this sad situation.

First, it is clear that Trump simply isn’t remotely outraged by what Russia did in the 2016 election. I doubt he even wanted to raise the issue, but probably felt like politically he had to do so. The obvious reality is that, in Trump’s narcissistic worldview, an act, no matter how wrong/dangerous, can simply NOT be bad/punishable if he benefitted from it.

Because Russia tried to help him win, and because he did, Trump just doesn’t see what the big deal is. To do so is just not in his DNA.

Can you imagine how he would be reacting now if it was clear Russia had backed Hillary Clinton in the election? It is safe to say that his interest in accountability and retaliation would be, uh, greatly enhanced.

Then there is the issue of Trump believing Putin’s denials. Is it possible that he didn’t REALLY trust Putin’s word, but just didn’t want make a big deal out of the issue because his heart simply isn’t in it? Sure it is.

It is also very possible, however, that given the way Trump’s mind works, he really does, inexplicably, believe that Putin told him the truth. You see, much like his cult-like following, Trump has a strong tendency to believe what he WANTS to believe. Since (assuming that he wasn’t directly involved in the first place, in which case he is in on the lie) he badly wants believe that the greatest achievement of this life was not marred by interference from a foreign foe, it is not at all difficult to convince him that it didn’t actually happened.

Trump’s massive ego plays an important role here as well. It is well known in Trump World that the most influential advisor to him is the last one he speaks to. This is largely because Trump seems to think that no one he trusts/respects enough to let near him would ever dare to mislead him. Since Putin is far richer and more powerful than Trump, in Trump’s distorted view, Putin would never lie to his face about something so important.

I hope that makes you sleep well at night.

Of course, since we now live in a country of alternative facts/realities, Trump’s rabid fan base and his favorite state-run “news” outlet think that this sort of analysis is all “fake news” and that everything went just according to the plan. They are actually correct about that, it’s just that the plan was Putin’s and not Trump’s.