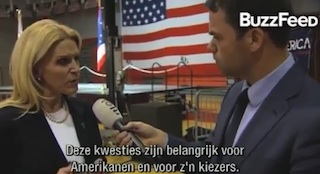 Erik Mouthaan, the US correspondent for the Dutch RTL Evening News, confronted Rick Santorum spokesperson Alice Stewart and peppered her with questions over the Republican hopeful’s controversial remarks about how the Dutch “involuntarily” euthanized senior citizens who were “older and sick,” BuzzFeed’s Andrew Kaczynski reports.

RELATED: Dutch TV Anchor To Rachel Maddow: The Dutch Are Furious At Santorum Over Euthanasia Claim

“As a Dutch reporter, I have to ask you about something (Rick) said about Holland and euthanasia,” Mouthaan began. “I don’t know if you read about that on the blogs. He stated that people wear bracelets in Holland saying ‘do not euthanize me’ and that people are involuntarily euthanized, do you remember him saying that?”

“The government of Holland says the — embassy says — the figures he used are not correct, he gave a wrong picture of the Dutch euthanasia rules,” Mouthaan explained.

“Rick is strong pro-life, he is for life from conception to natural death, and that is what the voters of America have stood behind him for and that’s why he’s getting support,” Stewart replied.

In February, Mouthaan spoke to Rachel Maddow about how Santorum had misrepresented his country’s euthanasia laws.

Watch the interview below via BuzzFeed: