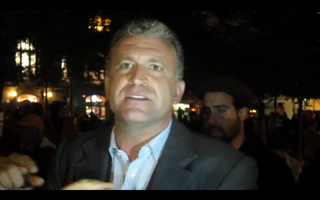 MSNBC’s money guy Dylan Ratigan seems to be serving regular hours down at Occupy Wall Street’s lower Manhattan hold, Zuccotti Park. Ratigan first showed up on Saturday, teasing “you guys are crazy!” while assuring that, “I am here because I agree with you.” Having fallen in with the crowd, Ratigan returned to the park last night, where AnimalNY’s Bucky Turco caught him for a taping of “The (Unofficial) Dylan Ratigan Show, Live from Zuccotti Park.”

If Ratigan is to be believed, the Occupy Wall Street movement far exceeds the known reaches of politics, encompassing wholly the “principles of our humanity that are being breached by the bought government.”

“This movement has an opportunity to transcend politics,” he tells Turco, who asked about the potential of the movement as compared to the Tea Party. “We are at a moment where it is just ‘us.’ We are just one enormous group of people, not in this square, but in this planet and in this country. All of us are Tea Partiers on some level, all of us are occupiers, all of us are that intention which is the frustration with the world that lacks fairness,” he continued.

Professing profound faith in the movement’s energy and potential, he says, “I can’t speak for myself, I could get hit by a bus walking home tonight, but I can speak for the permanence of the energy here.”

Check out the rest of AnimalNY’s Occupy Wall Street coverage here, and watch Turco’s full interview with Ratigan below: