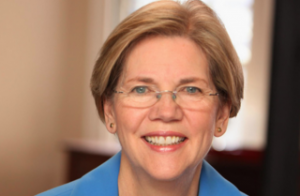 Elizabeth Warren, a senator from Massachusetts, has always been outspoken and determined. She’s had her plate full lately as she’s taken on the Republican establishment in the Senate, routinely lambasting their refusal to vote on President Barack Obama‘s Supreme Court nominee. She’s also surely under a little pressure due to persistent rumors that she might be the Democratic nominee for Vice President.

Her opponents have shot back at her in their own ways, but up until very recently Donald Trump had no bones to pick with her. Perhaps that is because she once defended bits of his policies. Regardless, she lashed out at him on Twitter recently and now it is on between the much-beloved lib and the equally-influential GOP frontrunner.

Let’s be honest – @realDonaldTrump is a loser. Count all his failed businesses. See how he cheated people w/ scams like Trump U.

Listen to experts who say @realDonaldTrump might have more money today if he’d put his inheritance in an index fund & left it alone.

But just because @realDonaldTrump is a loser everywhere else doesn’t mean he’ll lose this election.

.@RealDonaldTrump stands ready to tear apart an America that was built on values like decency, community, and concern for our neighbors.

Many of history’s worst authoritarians started out as losers – and @realDonaldTrump is a serious threat.

The way I see it, it’s our job to make sure @realDonaldTrump ends this campaign every bit the loser that he started it.

This all started when she did an interview in Massachusetts during which she scoffed at Trump for “even threatening to get anywhere near the presidency.” She followed that up last Monday with this Facebook post:

After she did that, she bashed him again during a speech. He finally responded in an interview. He said this to The New York Times:

I think it’s wonderful because the Indians can now partake in the future of the country. She’s got about as much Indian blood as I have. Her whole life was based on a fraud. She got into Harvard and all that because she said she was a minority.

Warren has Native American lineage, but has never claimed to identify as Native American. That hasn’t prevented her from getting roasted for what some people perceive as her attempts to use her heritage as an advantage.

Her tweets, then, were a response to Trump’s tweets. For what it’s worth, they’ve continued as I have been writing this. Here are a few more, hot off the presses of Warren’s phone or her intern’s laptop:

Why is it that @realDonaldTrump can call himself the “unity” candidate while basing his campaign on racism, sexism, xenophobia & hatred?

.@RealDonaldTrump is “cool with being called an authoritarian,” isn’t upset at Hitler comparisons & thinks we won’t fight back? WRONG!

We cannot elect wannabe tyrants to the White House. Not now, not ever. It’s up to all of us us to stop @realDonaldTrump .

Trump is no stranger to Twitter drama, so maybe we will see some response by the end of the day.