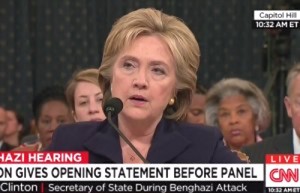 At least two emails released in the latest batch of former Secretary of State Hillary Clinton‘s private emails appear to contradict her testimony before the House Benghazi Committee that longtime ally Sidney Blumenthal did not advise her on Libya policy.

“He’s a friend of mine,” Clinton said during the eleven-hour testimony. “He sent me information he thought might be of interest. Some of it was, some of it wasn’t, some of it I forwarded to be followed up on. He had no official position in the government. And he was not at all my adviser on Libya.”

But on least two instances in the newest batch of emails, Blumenthal appears to advise Clinton on Libyan policy, and Clinton appears to take proactive steps to follow up on his advice.

In the first email, sent on February 21, 2011, Blumenthal advocates for a Libyan no-fly-zone. “UK former Foreign Secretary David Owen has called for a no-fly zone over Libya, imposed by the United Nations and/or Nato, like the no-fly zone imposed on Saddam’ s Iraq. US might consider advancing tomorrow.”

Clinton forwarded that email to Deputy Chief of Staff Jake Sullivan. “What do you think of this idea?” she asked.

The next day, Clinton responded to Blumenthal saying they would seek the no-fly zone. “We are looking at that for Security Council, which remains reluctant to “interfere” in the internal affairs of a country. Stay tuned!” she said.

In another 2012 email, flagged by Fox News’ Catherine Herridge, Blumenthal appears to connect Clinton with former British diplomat Jonthan Powell, who was doing work in Libya. “We are trying to replicate what we did in Northern Ireland by setting up secret channels between insurgents and governments and then, where appropriate, developing these into negotiations,” Blumenthal wrote.

Again, Clinton seemed receptive. “I’d like to see Powell when he’s in the Building,” she emailed advisors.