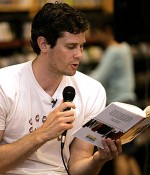 Paul Shirley is a basketball player by trade, but he’s gained most of his notoriety through events tangentially (at most) related to the game. Witness him sobbing tears of disappointment after his Iowa State team was eliminated from the 2000 NCAA tournament, which landed him a prominent newspaper placement. Or his book about his pro career, which has spanned not only a few NBA teams but a large part of the world. He received a stamp of approval from ESPN’s Bill Simmons appeared on one of Simmons’ first podcasts, and even landed a freelance writing job at espn.com.

But Shirley’s never been more in the news than he is now, thanks to a post he wrote at another endeavor of his, flipcollective.com. In it, he says the following:

I do not know if what I’m about to write makes me a monster. I do know that it makes me a part of a miniscule minority, if Internet trends and news stories of the past weeks are any guide.

I haven’t donated a cent to the Haitian relief effort. And I probably will not.

I haven’t donated to the Haitian relief effort for the same reason that I don’t give money to homeless men on the street. Based on past experiences, I don’t think the guy with the sign that reads “Need You’re Help” is going to do anything constructive with the dollar I might give him. If I use history as my guide, I don’t think the people of Haiti will do much with my money either.

Needless to say, public reaction was swift, voluminous and highly negative. ESPN couldn’t let him go quickly enough, and to call their release on the matter “terse” would be a massive understatement. Shirley will most likely be a pariah for a while.

So did Shirley deserve such backlash? Well…yes. Though he said he was “only trying to make [people] think,” he still said what he said, and one would assume he was telling the truth when he said he hasn’t donated to relief efforts. David Brooks of the New York Times expressed similar thoughts to Shirley’s (albeit in a more subdued tone) in a recent column, which led to a volcanic rebuke from True/Slant’s Matt Taibbi – Shirley couldn’t have expected he’d be received any more warmly.

Simply put, Shirley came off as willfully ignorant of the plight of people much, much less fortunate than himself. He’s right when he says building cities in locations prone to natural disaster is asking for trouble (“What were all those people doing there in the first place?”), but he conveniently ignores that most of the people affected had no say in where they lived – the decision to build a city in a precarious location was made long before they were born, and it’s tough for individuals to 1) control where they’re born, and 2) improve their living conditions when the system that governs them is notoriously corrupt.

As many, including Taibbi, have pointed out, people are still buried underneath mounds of debris – it just isn’t the right time for critiquing Haiti’s living conditions, much less the people enduring them. Shirley doesn’t like the possibility of his money going toward supporting an amoral regime – understandable. However, by not giving, there is a 100% chance he won’t be helping anyone in desperate need – people whose tears are over a lot more than losing a shot at the Final Four.