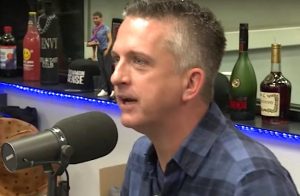 The feud between ESPN and their former star employee Bill Simmons has been very well documented, and highly contentious. On Wednesday, one Starbucks barista weighed in on the battle, and firmly declared themselves to be #TeamSimmons.

An unexpected present from the barista at the Starbucks in Culver City.

The key point here is that Simmons posted this picture to his Instagram account. And he did so with the following caption:

“An unexpected present from the barista at the Starbucks in Culver City,” Simmons wrote.

During an appearance last month on WWPR radio in New York, Simmons addressed the state of his relationship with his former employer and seemed to suggest there had been at least some thawing.

“It’s not great,” Simmons said. “It’s really not a relationship but I don’t think it’s as acrimonious as it was. Really weird shit happened the last couple years.”

But this sharing of an anti-ESPN message suggests that things may not be hunky-dory. Simmons’s HBO talk show Any Given Wednesday was pulled prior to the end of its first season. New projects with the network have yet to be announced.