Everything I Know About Cars I Learned From Everything Except Cars

Everything I Know About Cars I Learned From Everything Except Cars 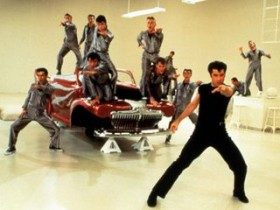 On the Internet, everybody has an opinion about everything, but if you’re smart you know when to keep your mouth shut. That was me during the “Cash For Clunkers” story, which I still don’t really understand nor have any desire to. I am not a car person — have never been, never will be. Not only do I not drive, I don’t have my driver’s license; there’s a story there, but the upshot is that I spent my high school years an ardent environmentalist and workout junkie who wanted to save the environment, burn calories and have my boyfriends drive me around. I remember Lawrence Berger drove his mom’s burgundy Oldsmobile, and I’d slide over in the middle seat next to him as we trolled the mean streets of suburban Don Mills, aka my northerly suburb of Toronto. Subsequent boyfriends with snazzier rides have never been able to compete with that feature. Like I said, I’m not a car person.

But! I am a pop culture person. And car people have clearly contributed to pop culture, which is how I knew about purple french tail lights and thirty inch fins without exactly knowing what they were. It was how I knew that cars were indicia of status and class differences (thank you, Bruce Springsteen and Dreamgirls), and how I knew that people who were too obsessed with that status were probably douchebags (thank you, “Justification For Higher Education” poster).

Turns out that, without knowing how to change the oil or why V-8 doesn’t just pertain to vegetable juice, I knew a whole lot about cars (even people who ain’t too clever/can learn to tighten a nut forever!). From Hot Rod to RamRod, Cadillac Assembly Line to Cadillac Ranch, Little Deuce Coupe to Little Red Corvette, here’s where I learned it all from. Maybe I am a car person after all — such a thrill when your radials squeal. Here we go: 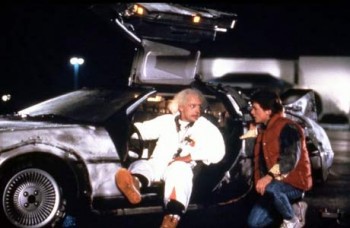 Back To The Future DeLorean DMC-12 Here’s the thing about the DeLorean: The doors go up. Even a non-car nerd like myself recognized that as cool in 1985 when my beloved Alex P. Keaton migrated to the big screen to shred a little Chuck Berry and not hook up with his mother. Like me, fellow Canadian Michael J. Fox was weaned on the metric system, so 88 miles per hour may not have sounded quite as impressive as 141.622 km, but still — nice car. 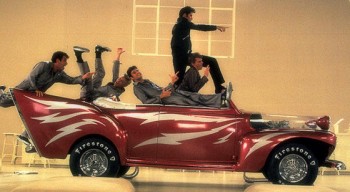 Grease 1948 Ford “Greased Lightning” This, for me, is the iconic car song, because it involves male bonding, cruising for chicks and very specific car knowledge all in one snazzily-choreographed package. When I first saw this movie at age 5 I was as clueless about overhead lifters and four barrel quads as I was about what, exactly, constituted a pussy wagon, but I understood that having a shiny car with lightning on the side was cool. (Similarly, I also understood that a black-clad pelvic-thrusting John Travolta was hot.) I cringed as much as the next purist to see that smooth sleek metal despoiled by Balmudo’s souped-up muscle car later in the movie, but that was a minor technicality; Greased Lightning drove on bravado, brotherhood and creaming chicks. Am I wrong, or is that basically the plot of The Fast and The Furious? Lighting, lighting, lightning, lightning, lightning! 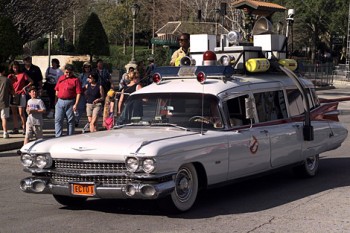 Ghostbusters Ecto 1 The Ghostbuster’s car wasn’t what one would describe as a pussy wagon, exactly, though it did get them to Gozer’s shrine where Dana awaited to lustily do the bidding of Zul, and that probably would have been enough for Bill Murray‘s Dr. Venkman. It was also an excellent example of how a car can be retrofitted with special features to customize it for specific use. Obviously necessary when transporting poltergeists that slime you with green goo. 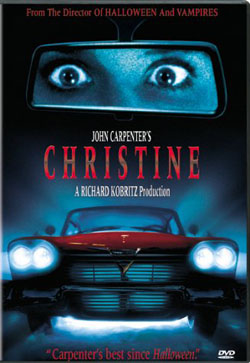 Christine 1958 Plymouth Fury When I was in junior high, I went through a major Stephen King phase. Christine wasn’t as bone-chillingly scary as The Shining with its dead people in bathtubs or as close to home as Cujo, the friendly dog next door who would rip your face off, but for sheer raw mayhem, inventive swearing and a fundamentally tragic love triangle to rival that of Lancelot, Arthur and Guinevere, it definitely holds up. Reading through the transformation of Arnie Cunningham from pimply pocket-protector-wearing nerd to the guy with the hot car who scored hot girl I can remember how lovingly Stephen King described the details of the car: The upholstery, the curves, the mechanics (not to mention how lovingly he described how the car would ram Arnie’s enemies straight to hell, spattered blood and matted hair and all). This trailer for the 1983 John Carpenter film version was far from subtle — we get it, the car’s a jealous bitch — but the book somehow made the rather ridiculous idea of a car possessed by Satan into a book that has stayed with me two decades later. I’m not sure what it taught me about cars but maybe it helps explain why I never got my license.

>>>NEXT: The General Lee, Archie Andrews’ Jalopy, and Julia Roberts in thigh-high boots