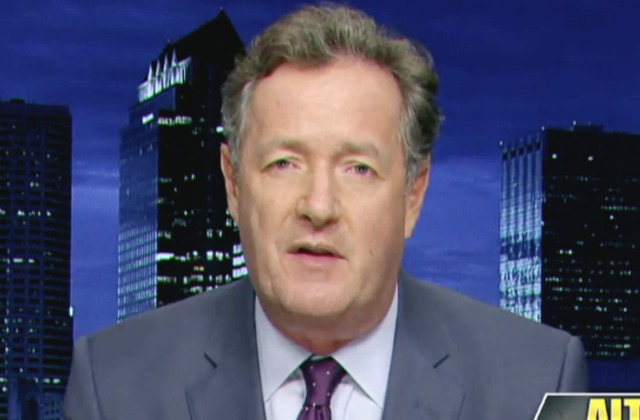 Piers Morgan ripped into Kathy Griffin on Twitter over her Friday press conference, but also took aim at his former colleague at CNN, Anderson Cooper.

During the presser, a journalist asked for the comedian’s reaction to Cooper’s condemnation on Twitter of her beheading photo stunt, which led to her firing from the New Year’s Eve special on CNN that the two co-hosted. Griffin tearfully declined to answer the question.

For the record, I am appalled by the photo shoot Kathy Griffin took part in. It is clearly disgusting and completely inappropriate.

Morgan reacted to this portion of the press conference with this shot at Cooper.

Trust me, Mr Cooper chucks everyone under a bus to save his career. Spineless little man. https://t.co/hdkfV24SJr

Despite siding with Griffin on that issue, Morgan had just devoted five Twitter posts earlier in the day to attacking the comedian over the Trump beheading photo:

So Kathy Griffin was a victim of sexism! Of course!
I just thought she posed with a disgusting beheaded image of the President. pic.twitter.com/aWKM8hX60J

‘He broke me….’ Griffin now weeping about Donald Trump objecting to her posing with this image. This is beyond parody. pic.twitter.com/DNFwwbk8FD

Disgusting. She deserves all the venom now pouring on her head. https://t.co/USaSJCD5cd

Morgan once spoke with both Cooper and Griffin on his old CNN show, where things went about as well as you’d expect: