If you’ve watched any political news the past two weeks, you could be forgiven for thinking that former Secretary of State Hillary Clinton’s new campaign slogan must be “Hillary Clinton: Liar, Untrustworthy, Crook,” because that bumper sticker phrase has been plastered all over the dial, and has been tripping off the tongues of every news anchor and/or pundit, and has even been repeatedly shopped to the candidate herself:

The narrative has been so successful that now, every time anyone uses the word “liar” on TV, they have to pay Hillary Clinton’s campaign a royalty. As these folks mentioned, this relentless branding effort is rooted in a Quinnipiac poll that asked voters “What is the first word that comes to mind when you think of Hillary Clinton?”

It is true that the top three responses given were “liar,” “dishonest,” and “untrustworthy,” but as CNN’s Jake Tapper was the only one to remotely suggest, the results don’t necessarily tell the whole story. To watch these clips, you’d get the idea that everyone (“people,” “voters,” “folks”) thinks Hillary Clinton is a crooked, untrustworthy liar, which I’m not sure is how Quinnipiac intended for this result to be used.

Even based solely on the results they released, that interpretation of Quinnipiac’s poll question is dubious, at best. The top three answers comprised 394 responses out of the 1,563 people who were asked, or just 25% of the responses. Unlike the rest of the poll, the answers to this question were not weighted against census data, but rather used the raw sample, which included a significantly higher percentage of men (4%) than the weighted sample, and more Republicans and Republican-leading independents than the weighted sample.

Those factors notwithstanding, the total number of negative responses offered on that list (561) was significantly greater than the positive (301) and neutral (185) responses combined, but the list that everyone’s quoting from only includes responses that were mentioned five times or more. That means that 516 of the responses (and/or non-responses) were not even included, a full third of those who were asked. On that basis, as far as we know, only 35% of the people asked had something negative to say about Hillary Clinton.

We know that this is not the case, however, because Quinnipiac released word clouds that included any response that was given more than once, but those still don’t tell us who was giving which responses, a far more useful way of interpreting this question than a simple numerical total. I contacted Quinnipiac, and they agreed to release the raw cross tabulations, previously unpublished, that show the party identification for every response that was given to their question more than once.

There are a few things to note in evaluating this data, according to Quinnipiac. “Note, these are unweighted frequencies for all responses mentioned at least twice in the total column, DK/NA’s are not included,” Quinnipiac’s Mark Bouchard said via email. “Additionally, the sum of rep + dem + ind numbers may not add to the exact total column as there are responses included in the total from respondents who do not identify with any of the three party id columns presented.”

The crosstabs also don’t separate leaners, which would have been significantly more complicated to calculate, but you can factor the proportions of the unweighted sample into your evaluation of these figures. Those proportions are 186 (43%) Republican-leaning independents, 132 (31%) Democratic-leaning independents, and 108 (25%) non-leaners. You can view the raw data here, but in the following charts, I’ve broken the responses down into categories (Negative, Positive, and Neutral), and their actual party identification cross-tabulations, then applied a rough formula to evaluate the likely breakdown of the leaners’ responses, assuming that the leaners’ responses were proportionate to those with firm party ID: 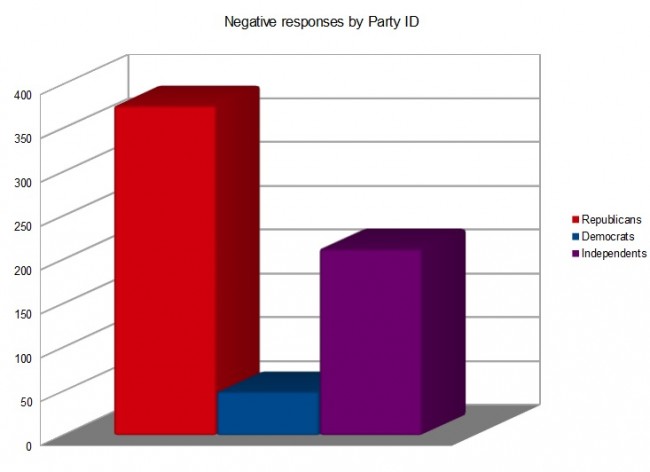 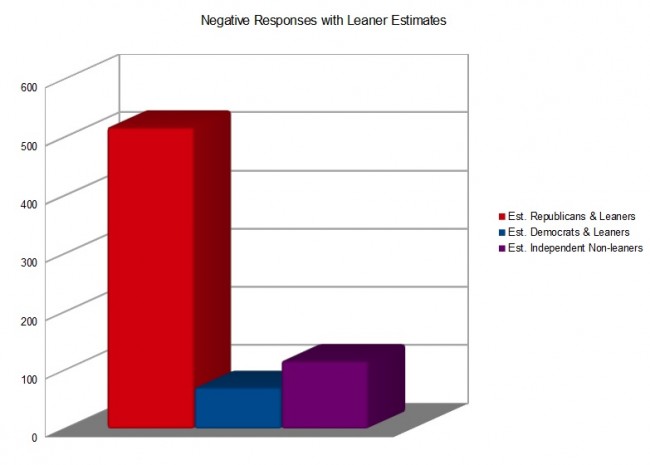 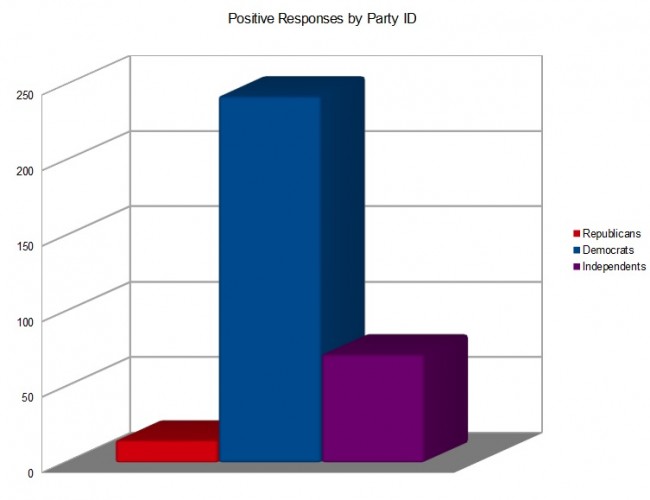 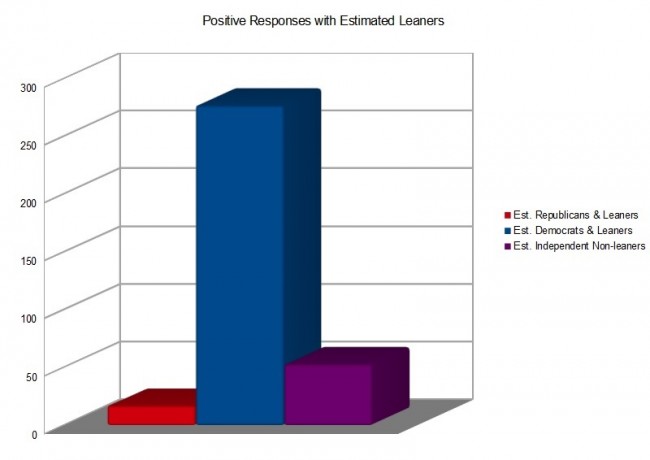 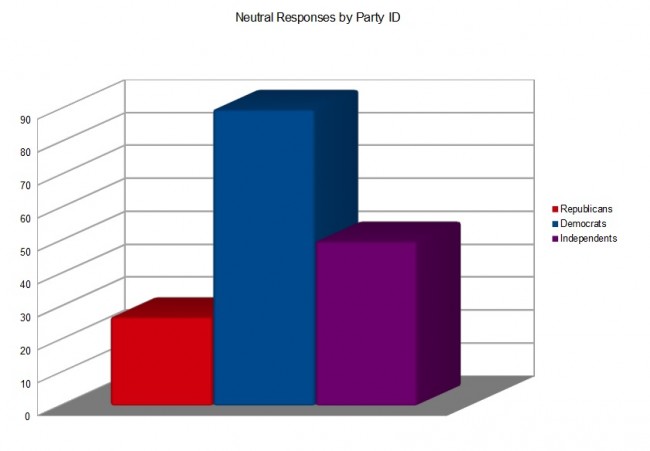 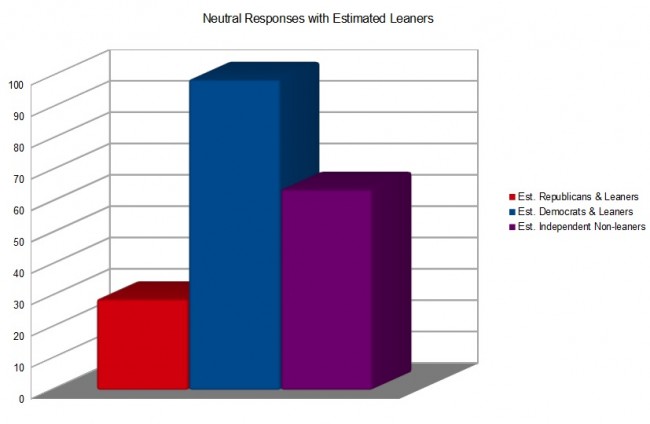 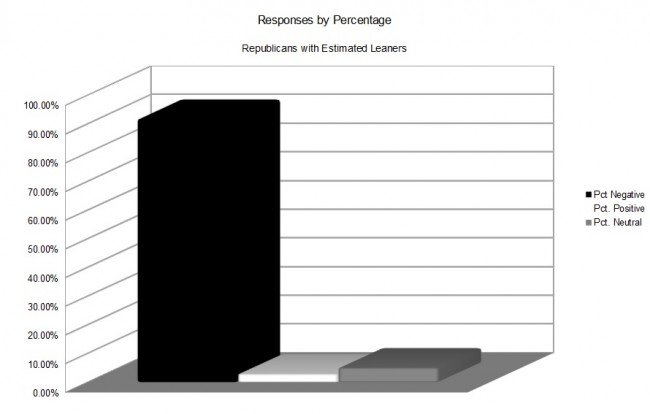 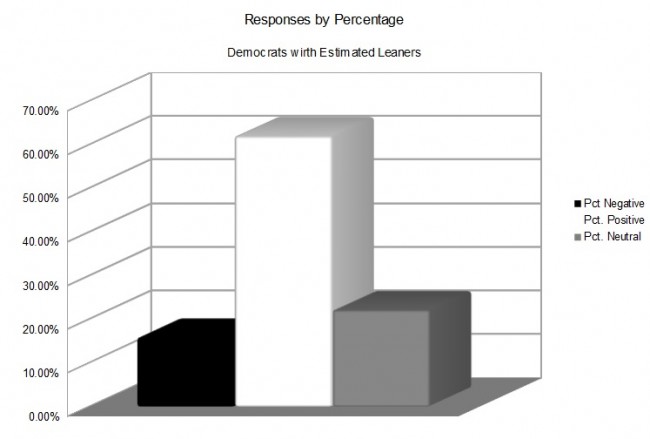 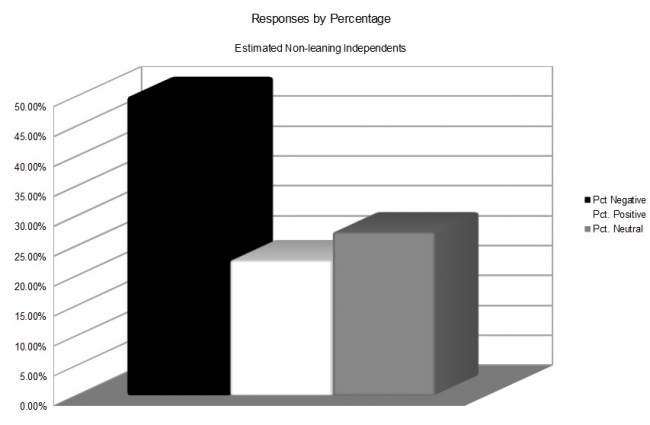 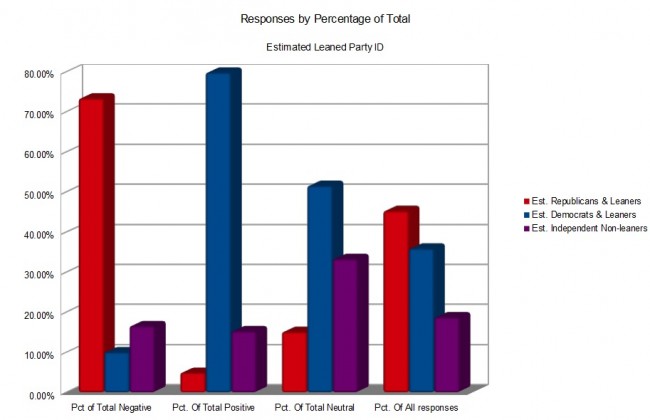 Because of the way the results were reported, Republicans and Republican leaners comprised 45% of the reported responses, while Dems and Dem-leaners made up only 36%. Again, this analysis still leaves out a good 20% of the overall responses (ones which were mentioned one time or less), but when you consider the responses in context, it’s pretty clear that the negative responses were overwhelmingly from Republicans or Republican-leaning independents, and that there’s a much higher degree of descriptive unanimity among them. If there’s a point to be taken from this question, it’s that Republicans think Hillary Clinton is a liar, and perhaps Democrats and independents aren’t quite as sure what they think of her.

That is not to say that Hillary Clinton doesn’t have some work to do in the trustworthiness department, as even among Democrats, about 30% say she’s not honest and trustworthy, but it’s not the first thing they think of. In that recent Iowa poll that showed Bernie Sanders leading Hillary by a point, she smoked Sanders and Biden when Democrats were asked if the candidates have “strong leadership qualities” (92% for Clinton, versus 76% for Sanders and 81% for Biden) and on whether they have the “right temperament” for the presidency (89% for Clinton, 65% for Bernie, 81% for Biden). Hillary performed less well on the question of whether the candidate “cares about the needs and problems of people like you,” with 78% to Sanders’ 85% and Biden’s 84%, but still close.

The fact that the media has apparently adopted a “turn the corner” narrative on Hillary’s apology over the email issue could help, but the real problem that the “liar” question raises is that while Republican types really, really don’t like Hillary, Democrats and independents are somewhat ambivalent.

Ironically, one solution to this could be for the Democrats to stop trying to “protect” Hillary by hiding their handful of debates under a bush. Thanks to Donald Trump, there’s just a lot more media energy around the Republican race, and it’s drowning out everything on the Democratic side that doesn’t include the words “email” and “Bernie-mentum.” More debates would get people talking about the Democratic race, and perhaps allow Hillary to show off the attributes that voters are attracted to, while giving her an opportunity to work on the others.