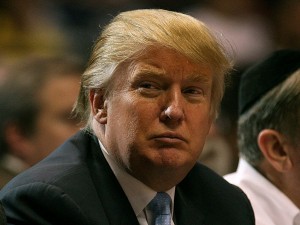 After a failed attempt earlier in the week to provide his birth certificate, Donald Trump on Tuesday proved that he is in fact an American citizen. Trump is the latest person to demand that President Obama prove he, too, is an American, and the stunt got people wondering about Trump’s intentions. The birther movement may have found its biggest supporter in Trump who, many say, is pandering to a conservative crowd as he eyes a potential presidential run.

“Trump and his cheerleaders have good reason to believe there’s traction to be gained in the primaries by hauling the birther issue from the political wings to center stage,” says Tim Hodgson at FrumForum. “It’s an unconventional play for someone without any elected experience,” adds Patrick O’Connor at The Wall Street Journal. As Trump continues to voice his claims, some commentators are fighting back. Here, their best jabs and jibes:

Just be honest, Donald: “Frankly, I wish Trump and his fellow birthers would just go ahead and call Obama an N-word. Yes, it would be reprehensible and offensive. But it would be a damn sight more honest, too,” says Leonard Pitts Jr. in the Miami Herald.

This reflects poorly on the GOP: “I think Trump is having a publicity-seeking lark. But whether he’s really serious this time or putting us on again, Trump’s birther ploy exposes how much the Republican Party’s nutty wing is driving their looming primary contest like a tail wagging a dog,” says Clarence Page in the Chicago Tribune. Obama should just let these attacks go on because “why get in the way of the opposition party when they’re coddling their own kooks?”

Maybe there’s something else going on…: “One has to ask: Is Donald Trump, seemingly a ‘birther’ running for the GOP presidential nod, really an Obama sleeper agent?” asks Robert Schlesinger at U.S. News and World Report. Do I really believe that? Well, “I’d put it this way: This conspiracy theory requires as big a suspension of disbelief as does contemplating President Donald Trump.”

…is he even real? “Have you ever met Trump? No, you haven’t. You’ve seen him as an assemblage of glowing pixels on a screen. That proves nothing. Homer Simpson is made up of pixels too,” says Peter Grier in The Christian Science Monitor. “This indicates that Trump may be an animation –an animation drawn by artists in a foreign country, we might add.” But enough kidding around: “We know Trump is a real person.” Right?