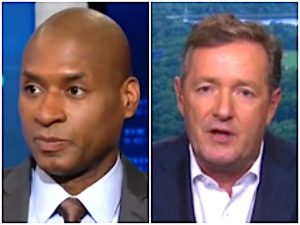 Following President-elect Donald Trump‘s visit to The New York Times offices on Tuesday, op-ed columnist Charles Blow penned a scathing editorial in which he declared that he was glad not to have been forced to exchange pleasantries with the soon-to-be President.

“I will say proudly and happily that I was not present at this meeting,” Blow wrote. “The very idea of sitting across the table from a demagogue who preyed on racial, ethnic and religious hostilities and treating him with decorum and social grace fills me with disgust, to the point of overflowing. Let me tell you here where I stand on your ‘I hope we can all get along’ plea: Never.”

Strong words, just might have been more courageous to say them to Trump’s face when he went to NYT offices.
Bit gutless doing it after, no? https://t.co/W1Lb3GcQAS

To which Blow responded:

Again, more courageous to say it to my face. Happy Thanksgiving, Charles. https://t.co/q3Oe49EhU1

Blow hasn’t yet replied to Morgan. But Morgan has continued to tweet criticisms of Blow and The Times, saying that Blow and the paper of record have been “abusing Trump all year.”

No, I know Charles & like him. He’s just hit peak Clintonite fury at Trump’s win & needs to calm down. https://t.co/dW1YsS6FSX

Very convenient for a keyboard warrior. He should have been in the room, saying it to Trump’s face. https://t.co/017RNrLsTx

I see. And how many fearless NYT hacks told him that when he went to their office? Ah yes, that would be none. https://t.co/J9NtUyR4ND

We’ll be sure to update this post with any further exchanges.