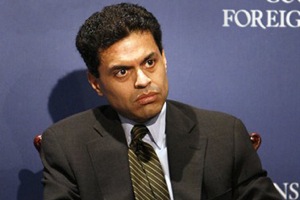 Update IV: CNN has also suspended Zakaria from his program. Via POLITICO:

We have reviewed Fareed Zakaria’s TIME column, for which he has apologized. He wrote a shorter blog post on CNN.com on the same issue which included similar unattributed excerpts. That blog post has been removed and CNN has suspended Fareed Zakaria while this matter is under review.

Update III: TIME has accepted Zakaria’s apology but is suspending his column for a month. Per a TIME spokesperson, via POLITICO:

TIME accepts Fareed’s apology, but what he did violates our own standards for our columnists, which is that their work must not only be factual but original; their views must not only be their own but their words as well. As a result, we are suspending Fareed’s column for a month, pending further review.

Media reporters have pointed out that paragraphs in my Time column this week bear close similarities to paragraphs in Jill Lepore’s essay in the April 23rd issue of The New Yorker. They are right. I made a terrible mistake. It is a serious lapse and one that is entirely my fault. I apologize unreservedly to her, to my editors at Time, and to my readers.

Update:A spokesperson from Time tells us that “TIME takes any accusation of plagiarism by any of our journalists very seriously, and we will carefully examine the facts before saying anything else on the matter.”

Here is an excerpt from Lepore’s article:

As Adam Winkler, a constitutional-law scholar at U.C.L.A., demonstrates in a remarkably nuanced new book, “Gunfight: The Battle Over the Right to Bear Arms in America,” firearms have been regulated in the United States from the start. Laws banning the carrying of concealed weapons were passed in Kentucky and Louisiana in 1813, and other states soon followed: Indiana (1820), Tennessee and Virginia (1838), Alabama (1839), and Ohio (1859). Similar laws were passed in Texas, Florida, and Oklahoma. As the governor of Texas explained in 1893, the “mission of the concealed deadly weapon is murder. To check it is the duty of every self-respecting, law-abiding man.

…and here is a similar paragraph from Zakaria’s:

Adam Winkler, a professor of constitutional law at UCLA, documents the actual history in Gunfight: The Battle over the Right to Bear Arms in America. Guns were regulated in the U.S. from the earliest years of the Republic. Laws that banned the carrying of concealed weapons were passed in Kentucky and Louisiana in 1813. Other states soon followed: Indiana in 1820, Tennessee and Virginia in 1838, Alabama in 1839 and Ohio in 1859. Similar laws were passed in Texas, Florida and Oklahoma. As the governor of Texas (Texas!) explained in 1893, the “mission of the concealed deadly weapon is murder. To check it is the duty of every self-respecting, law-abiding man.”

Both works also contain other similar passages with echoed information, quotations, and wording.

The Atlantic points out that is not the first time Zakaria has borrowed from other author’s work without proper attribution:

The Atlantic‘s Jeffrey Goldberg pointed out that Zakaria in 2009 had lifted quotes from his interviews without attribution–today’s piece runs without any mention to Lepore. So what gives and just how bad is this? Well, going by The New Yorker‘s Lehrer Plagiarism Scale, we’d say it ranks worse than Jonah Lehrer borrowing from himself (a misdemeanor according to editor David Remnick said at the time) but not as bad as Lehrer making up quotes (which eventually spelled his resignation from this magazine). And this offense seems a lot more serious than recycling a commencement speech, which Zakaria did this year at Duke and Harvard.