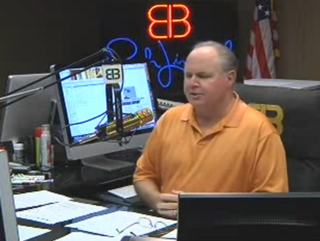 Americans are an enterprising people, one that have managed to find fashion inspiration in the most peculiar of places. On Rush Limbaugh‘s radio show this week, one such American called in to ask Limbaugh what to do about the fact that her skin tone didn’t take very well to the color orange, and to offer some free advice to First Lady Michelle Obama: yellow makes her look “like a tub of mustard.”

In an ambiguously racially-tinged (and definitely cringe-worthy) conversation, the caller complained that she was “sick and tired of hearing about our First Lady and her fashion,” comparing the coverage to “The Emperor’s New Clothes” before taking several swipes at her personally– that Obama looked “like a lumberjack” and “a tub of mustard” when she wore yellow, and that “most of the reporters are just a bunch of kiss-butts.” “I’m sure your observations are shared by many,” Limbaugh added helpfully.

The caller, who sounded rather senior, then took a detour in the conversation to note that “my particular skin color, I cannot wear orange… because it makes me look orange.” Limbaugh then proceeded to give her some fashion advice: “couldn’t that just be the reflection of the fabric on your epidermis?” To make her feel better, he told her he was wearing orange himself, despite being told ‘it’s a little bit too soft of a pastel color for me.” The conversation then shifted once again to the First Lady, who, unlike previous times, he abstained from outright calling fat, instead noting that “I’m not going to say what I think about her shape– I’m not sure what it is.”

Listen to the caller’s grievances below: