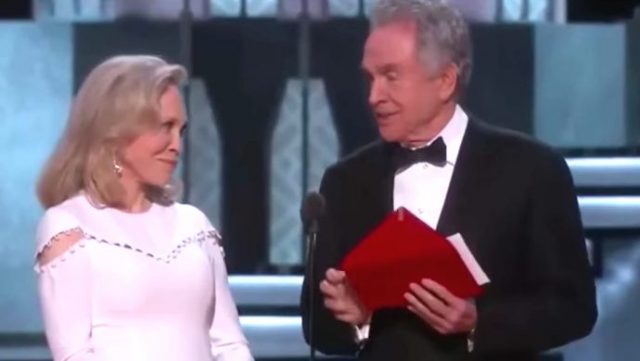 Last night’s major Oscars mistake that saw Warren Beatty and Faye Dunaway announce La La Land as Best Picture when Moonlight really won is something we’re all going to be talking about for a very long time. We all watched Warren Beatty fumble with the envelope — clearly confused because he was unexpectedly holding the envelope for Best Actress — and then hand it over to Dunway, who quickly and incorrectly announced that La La Land had won. According to a report from TMZ, there was a fight over who ultimately got to read who won. We’re betting that had they known how it was all going to play out, that wouldn’t have happened.

The report says their entire time together was tense. According to TMZ, the two wouldn’t even block their walk onto the stage together at rehearsal, and they fought over who got to read the name of the winner, with Dunaway eventually getting what she wanted. (Clearly, no one won that argument.)

There was definitely tension after the show, too. When Extra caught up with Dunaway and asked about what had happened, she said, “I’m not going to speak of that. Warren is the right one.”