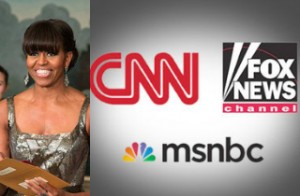 The recent attacks from both conservatives and liberals on the First Lady’s Oscar appearance and the President’s golf weekend are perfect examples of a growing need for the media to create something out of nothing.

Michelle Obama performing an act as benign as announcing the winner of an award few will remember (quick, what movie won Best Picture last year? 94.6 percent of you can’t answer that question without looking it up…even I had to) or the President playing a round of golf without allowing the press access are battles “journalists” shouldn’t bother wasting any calories on. Because when there’s actually a story that’s meaningful and tangible that justifies an adult conversation and/or actually could have an effect on people’s lives, those living outside the bubble will only see it as more noise coming from a columnist, blog, publication or network with an agenda.

So why do attacks like this happen? Is it a matter of certain aspects of the media opposing everything the Obamas do because of ideology, racism or a combination of both?

In terms of racism, that dog don’t hunt when applying unambiguous numbers to the debate: For the first time since FDR, Mr. Obama is the only Democrat to receive a majority vote in consecutive presidential elections. If racism is as rampant as some at, say, MSNBC claims it is via dog whistles and the like, it’s hard to imagine the President even sniffing a second term…particularly when there were no economic tailwinds (high unemployment, minimal GDP growth, spiraling debt/deficits, unsustainable entitlements, etc.,) to allow for the relatively easy victories he scored against John McCain and Mitt Romney.

That leaves ideology, but what is ideological about an Oscar appearance or a weekend visit to the links? For the former, Ronald Reagan and George W. Bush both also “intruded” on the Oscars via taped appearances. Dwight Eisenhower played more golf than Obama could dream of. So what is driving this kind of hysterical behavior right out of the Seinfeld playbook, a show about nothing?

The answer, of course, is money. Blogs, opinion journalism and polarized cable networks are all in business to supply its audience something to get angry about. And some days, there just isn’t enough raw material to fill 18-19 hours of programming.

Consequently, a need for controversy to be manufactured has emerged. In order to do so, cable news producers resort to a standard checklist of advocacy blogs and publications in an effort to find ideas for programming. In fact, they religiously depend on everything from Drudge to The Daily Caller to Daily Kos to Think Progress (depending on network) to assist in creating segments they see as (for lack of a better word) the sexiest.

For example, Michelle Obama at the Oscars is sexy because of the large audience watching the original program (viewers can relate) and the obvious name recognition. The President playing golf isn’t all that attractive, but when adding in some Tiger Woods and a media bias angle into the mix (Obama will give an exclusive interview to Al Sharpton a few days after the Tiger trip, but can’t bother with the White House Press Corps in any capacity), you’ve got some meat to chew on.

From there, producers will book the usual (tediously predictable) guests to “battle” over the topic, and that producer can scratch one more segment off the laundry list.

Cable news in 2013 is no different from a McDonald’s drive-thru: Demand is always strong and the orders just keep coming. It’s a volume business. Cheap grub, instant gratification…but work can be long hours with lots of food (segments) to prepare.

Or…you don’t work for a media outlet that needs to cry wolf on an hourly basis just to satisfy a business model that depends on feeding its audience something, anything to keep the polarized fires burning.