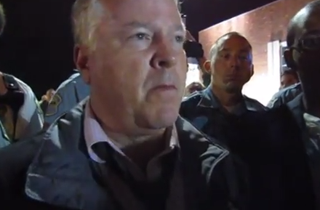 Hours after he released a video apologizing to the family of Michael Brown for how he mishandled their son’s body, and to the demonstrators in Ferguson, MO for not protecting their right to protest, Ferguson Police Chief Thomas Jackson decided last night to join — yes, join — a protest calling for his own resignation.

According to video footage from the rally, it didn’t go well, because within 30 seconds of his joining the crowd, this broke out:

“I don’t think he was marching with the protesters more than 30 seconds before the riot cops came out into the crowd and tried to get themselves closer to him and protect him,” St. Louis Alderman Antonio French, who’s been on the ground in Ferguson since Brown’s death last month, told NBC News. “Just them being out there pushing started stuff — it’s a complete misread of the situation. His very presence agitated the crowd.” French tweeted later that Jackson’s very ability to spark a riot by merely being there, in a crowd full of Ferguson residents, was a clear sign that the police chief needed to step down from his position immediately.

Police arrested several protesters that night, and by 3 AM, told the crowd to disperse for “unlawful assembly”.

Earlier that day, Jackson defended his video apology on CNN, saying that he’d felt responsible for how the situation in Ferguson had devolved. “This is something that’s just been weighing on me,” he said. “Something that needed to be said– should have been said a long time ago. Shouldn’t have happened, but it did.”