Fired Univision Host Apologizes to Michelle Obama; Says He Was Taken Out of Context
video

Fired Univision Host Apologizes to Michelle Obama; Says He Was Taken Out of Context 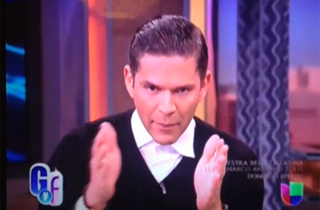 The Univision host who was fired for comparing Michelle Obama apologized in an open letter today, claiming his words were taken out of context.

Rodner Figueroa was talking about a makeup artist who managed to transform himself into dead ringers of female celebrities. Figueroa brought up one he did turning into the First Lady and remarked, “Mind you, you know that Michelle Obama looks like she’s part of the cast of Planet of the Apes, the film.”

It didn’t take long before Figueroa was fired and Univision condemned his “reprehensible” remarks.

Figueroa today posted a lengthy open letter to Michelle Obama online today, apologizing for his joke, saying it was “clearly in bad taste and misunderstood.”

He claims that the joke “was not directed at you, but at the result of an artist’s depiction of you that I found wasn’t accurate.”

I feel embarrassed, and I hope you can forgive me, because there is no excuse. As a professional, I hold myself to high standards and there is no justification for someone at my level to make any kind of comment that could be interpreted as offensive or disrespectful to you personally, or to any minority in the times we live… As distasteful and out of line as my comment could have been perceived, I don’t believe I deserve to be branded a racist.

He claims that he was terminated after Univision received a complaint from the White House and was never given an opportunity to tell his side of the story.

You can watch the clip in question here: