Fiscally Conservative? GOP Pushes Bill To Put ‘In God We Trust’ On All Federal Buildings 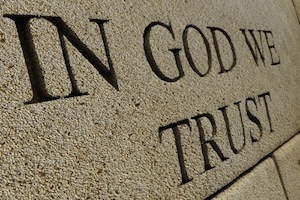 Finally, the Republican-run Congress will do what the Democrats couldn’t; make new jobs. A powerful bill is set to be voted on by the full House after being passed by the Judiciary Committee last week. This legislation will reaffirm “In God we trust” as our national motto and support slapping the slogan on the side of all federal buildings. So, yes, unemployed people who formerly made building signs for a living, you’re gravy train just came in. As for the rest of you…well, I bet the army’s hiring.

The bill is being sponsored by Rep. Randy Forbes of Virginia who told Politico that the phrase is just as right for America today as when it was first made our official motto in 1956. Before 1956, apparently, America didn’t trust God, wouldn’t loan Him money, and would never ask Him to pick them up at the airport.

The bill has faced its share of detractors. Many secularists have claimed that the motto breaks the division of church and state while an earlier version that Forbes sponsored while the Democrats were in power didn’t make it through at all. However, just as the Supreme Court rejected a suit to remove the phrase from American currency earlier this month, the House Judiciary Committee passed the measure and its picking up steam in the House proper. Besides, Forbes has said that the motto isn’t just “about Christians” and addresses many religions. Which, I suppose, means the “God” in “In God we trust” is more vague and can mean whomever you want from Yahweh to Thor to Bruce Almighty. Who wouldn’t want to spend time declaring our faith in “Whomever Whoever Is Talking At the Time Wants”?

Others have questioned the financial sense of putting up a bunch of signs in times of such dire straights (watch as the Left inflates sign-making costs as well as the Right inflated tape-removal costs). Sure there are cheaper ways to affirm the nation’s religious nature (like, just having faith in your heart and not needing a sign to prove a fundamental belief you hold strongly enough that it’s a part of who you are), but there are also more expensive ways. There would really be reason to complain if Congress wanted to bus all federal employees out somewhere to hold trust-building exercises with a holy power (“These footsteps in the sand are where I was walking, and this imprint is where You put a bunch of soft sand to catch me during trust falls”).

All of this is, of course, very, very pressing. If a few hours is all it takes to run a war, then surely Congress can spend a little time and money to prove how religious our buildings are.

Watch U.S. Representative Gregg Harper (R-Miss.) speaks in support of the bill below: