Florida Newspaper Tears Into Rubio on Missed Votes: ‘You Are Ripping Us Off, Senator’
missed votes

Florida Newspaper Tears Into Rubio on Missed Votes: ‘You Are Ripping Us Off, Senator’ 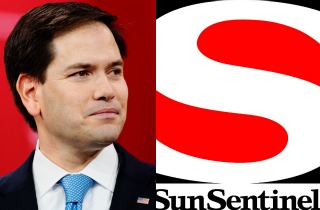 As the Republican candidates turn their attention towards the national spotlight for tonight’s CNBC Debate, one particular Senator in the running is facing opposition from his home state. Senator Marco Rubio of Florida — currently polling third for the GOP nomination — has been under fire for his poor attendance record in the Senate during his campaign. When asked recently by a voter why he has missed so many intelligence briefings and votes in his home state, Rubio replied, “Because I’m running for president.”

But now it seems as if the voices clamoring from the Sunshine State are getting louder, large in part to a piece published on behalf of the Sun Sentinel editorial board late Tuesday night. The Sun Sentinel, out of Broward County, Florida took the Senator to task for what they view as his continued negligence of his home-state constituents, while his national ambitions take priority. The Sentinel board writes, “Rubio has missed more votes than any other senator this year. His seat is regularly empty for floor votes, committee meetings and intelligence briefings. He says he’s MIA from his J-O-B because he finds it frustrating and wants to be president, instead.”

Speaking directly to Rubio, the editorial board continues:

Sorry, senator, but Floridians sent you to Washington to do a job. We’ve got serious problems with clogged highways, eroding beaches, flat Social Security checks and people who want to shut down the government.

If you hate your job, senator, follow the honorable lead of House Speaker John Boehner and resign it.

Let us elect someone who wants to be there and earn an honest dollar for an honest day’s work. Don’t leave us without one of our two representatives in the Senate for the next 15 months or so.

You are paid $174,000 per year to represent us, to fight for us, to solve our problems. Plus you take a $10,000 federal subsidy — declined by some in the Senate — to participate in one of the Obamacare health plans, though you are a big critic of Obamacare.

The Sun Sentinel piece went on to identify that a few other Senators who have managed to launch Presidential campaigns while staying true to their home districts. According to the Sun Sentinel, Senators Rand Paul and Bernie Sanders have missed, “only 10 Senate votes during their campaigns for the White House. You, on the other hand, have missed 59”.

This comes after a longtime friend of Rubio’s anonymously told The Washington Post that Rubio “hates” his job as Senator. The editorial board of the Sun Sentinel concluded its piece with, “Your job is to represent Floridians in the Senate. Either do your job, Sen. Rubio, or resign it.”