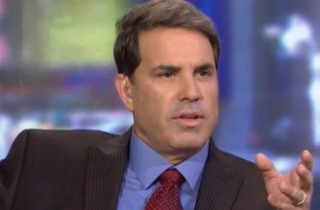 Former CNN anchor Rick Sanchez wrote a piece for Fox News Latino Thursday about how “Latinos don’t matter” to cable news networks, and he honed in on MSNBC in particular for crying foul about racism all the time, “proven or unproven,” but somehow finding nothing wrong with some rather politically incorrect Cinco de Mayo coverage.

MSNBC anchor Thomas Roberts did a brief bit earlier this week about Cinco de Mayo that involved a sombrero and tequila, and some Latino advocacy groups were outraged. In fairness, MSNBC and Roberts apologized, but Sanchez still found it “abhorrent” and suggests, “All they needed to make it a little more insensitive and offensive would have been ‘Speedy Gonzales,’ ‘Jose Jimenez,’ and maybe ‘Frito Bandito’ holding the microphone.”

Sanchez points to MSNBC’s Donald Sterling and last week’s controversial SNL sketch about slavery to argue that “the NBC networks” have displayed rather a profound ignorance about Latino issues.

In MSNBC’s defense, they were just goofing on Mexicans. No one important. It wasn’t “real” racism or sexism or homophobia. It was jalapeño and tequila jokes, not Donald Sterling statements.

And considering how much MSNBC sounds the alarms about racism, Sanchez observed, this is a particularly ironic situation.

How funny, ironic and sad that the network which cries the most about discrimination (racism, sexism, homophobia), day and night, true or false, proven or unproven—and uses racism charges as a bludgeoning tool against it’s political opponents and competing networks–doesn’t see fit to care about the sensibilities of 17 percent of the U.S. population.