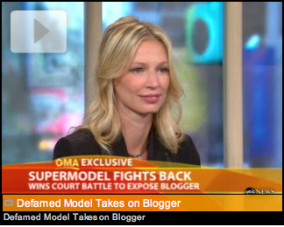 Beware anonymous commenters and bloggers, your glory days may be numbered; a former model may have just killed the Internet as we know it. Liskula Cohen did not take too kindly to being called a skank on the anonymously run blog “Skanks in NYC.” Instead of rolling over and concluding that hey(!) slander is just the way of things in this new media world, she took it to the New York Supreme Court and demanded that Google hand over the identity of the person responsible for the site, which had been launched using Google’s Blogger platform. Yesterday Google complied.

Today on Good Morning America Diane Sawyer asked Cohen (video below) why didn’t she just let it go, it’s not like meanness on the Internet is all that unusual. Responded Cohen: Why should anyone let it go? Why indeed. And how come no one’s thought of this before. It’s also important to note that Cohen was responding to having her sexual behavior called into question by the anononymous blogger, something that happens to women on the Internet all the time. So good for Cohen. But what does this mean in the larger picture.

Is this the beginning of the end of anonymity on the web? And what happens if it is? Even major websites heavily depend on the traffic generated by commenters, anonymous commenters. And as anyone who has ever spent any time on sites like the Huffington Post already knows a lot of commenters are nuts. So what happens if everyone starts taking everyone who says something not nice about them on the Internet to court! Well, for one a lot of online entities would have to quit trucking in the sort of headlines and stories that attract the sort of crazy commenters that tend to use words like skank. And would that be such a bad thing really? People get away with a lot of crap on the Internet under the cloak of anonymity. Would you Imagine an internet where everyone had to stand behind their own words. Might that result in higher level of discourse? Dare to dream. Of course, it could also result in a clogged court system. But the seed had certainly been planted. One thing is for sure, we live in a litigious society and it’s just a matter of time before a far higher profile person decides they don’t like what someone is saying about them. So start thinking twice before you post.