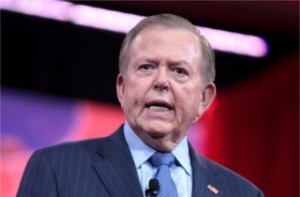 If he had any pretense of objectivity, Lou Dobbs abandoned it this weekend, tweeting up a storm of pro-Donald Trump activism.

Dobbs is the host of Fox Business’ Lou Dobbs Tonight, a commentary show he has hosted on Fox Business Network weeknights at 7pm since 2011. Many believe Dobbs lost his job at CNN after his proclivity to vent his conspiracy-laden opinions on a host of issues, perhaps most prominently regarding his anti-immigrant stance, compromised his objectivity in the eyes of the network.

Dobbs’ recent pro-Trump Twitter spree recalls his history of aligning himself with Trump’s extremist views — as when he gave airtime to birther conspiracies on his CNN show — a move that pre-empted him losing his job at the network in 2009.

Other conservative pundits have demonized Democrats and called for Republican unity, but have stopped short of this kind of frenzied endorsement for a single GOP candidate. Sean Hannity, for example, has taken to tweeting out #NeverHillary, but has restrained himself Dobbs’ level of rabid enthusiasm for Trump. (see below)

I have given equal time to @SenTedCruz and @realDonaldTrump Since many seem to be losing it, #NeverHillary for me! https://t.co/2Muq1gYacP

Dobbs, on the other hand, has been blasting Ohio Gov. John Kasich and Sen. Ted Cruz — the other two Republican candidates still seeking the nomination:

Kasich Has Lost It: Senate Republicans ‘Probably Ought to All Sit Down and Meet With’ Obama’s SCOTUS PICKhttp://bit.ly/1SbQhB8 #Trump2016

And do you believe a single word of what he says? #Trump2016 #MakeAmericaGreatAgain #Dobb https://t.co/5GSM4DbHiB

Some of Dobbs’ tweets link to articles to which the Fox Business anchor adds a dash of commentary. But many others are just unabashedly pro-Trump bromides punctuated by The Donald’s hashtag: #MakeAmericaGreatAgain.

So,@realDonaldTrump runs for nomination, spends his millions, son and sister threatened, GOP Elites betray him, and he shouldn’t be angry?

In one tweet, he wonders aloud what Mormons are “preaching,” since a new poll showed that the LDS members were more likely to support a Democrat than Trump:

What Are Mormons Preaching? Utah To Support Dem If Trump is GOP Nominee https://t.co/4Lmee7aWh5 via @intelligencer #MakeAmericaGreatAgain

Sometimes Dobbs replaces an editorial’s headline with his own, even more ardenltly pro-Trump gloss:

Dobbs also praised the “great reporting” of Mike Cernovich, a Gamergater and Trump fan whose website, Gawker writes, is “a repository of the dullest, lamest forms of male chauvinism and pickup artistry.” The article in question attempted to discredit Michelle Fields, the former Breitbart reporter, who claimed Breitbart threw her under the bus after she accused Trump’s campaign chairman of assaulting her at a rally.

Dobbs retweeted a “prayer for the safety of Donald Trump.” Objectivity guidelines would suggest that Dobbs issue a similar public “prayer” for the other candidates — something he doesn’t appear to have done. 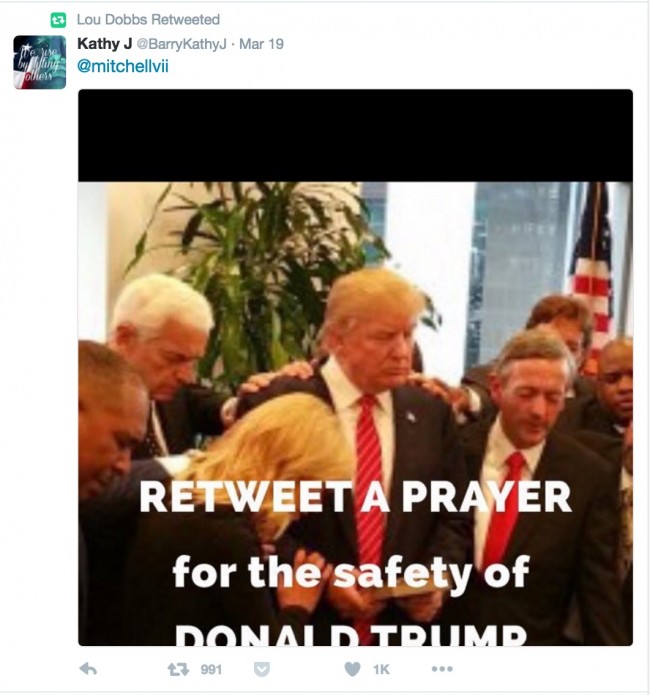 He characterized a successful rally, despite “3rdWorld” and “unlawful” protester activity, as a “triumph.” 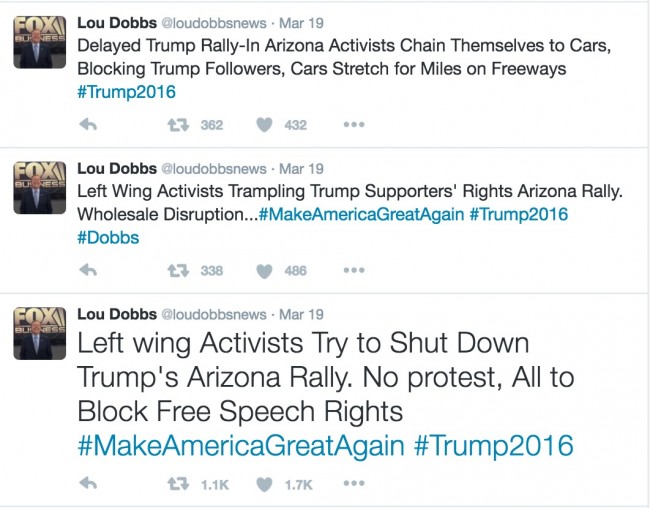 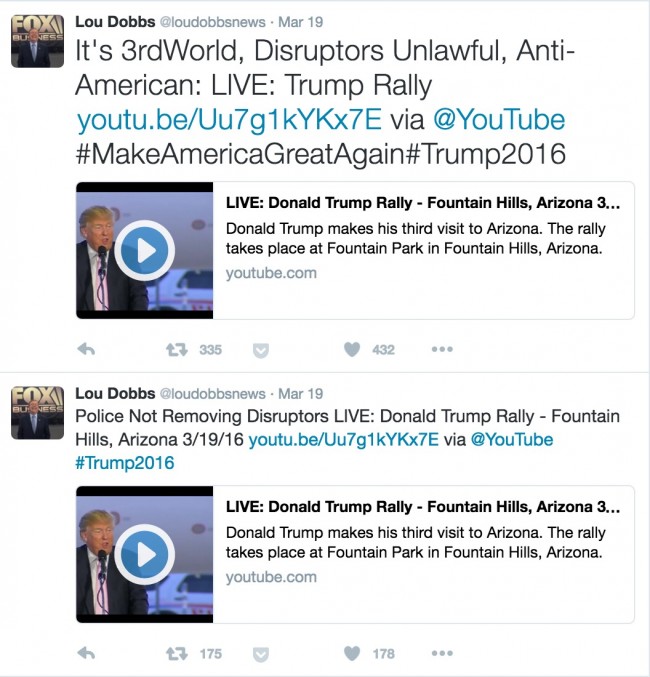 If It’s Not Time to #MakeAmericaGreatAgain, when will it be? LIVE: Donald Trump Rally Arizona 3/19/16 https://t.co/BCq1wH8BXE via @YouTube

Romney endorses Cruz in hateful post on facebook attacking @realDonaldTrump, some praise for Kasich, none for Cruz. Crazy #Trump2016#Dobbs

Does adding the hashtag signal an endorsement? Arguably, Dobbs could be using the tag to draw Trump supporters to his tweets. But — in aggregate — phrases like “Trump’s Triumph,” the mocking of Mormons who may be backing a Democrat, the characterization of anti-Trump endorsements as “hateful” and anti-Trump protest as “3rdWorld,” to an unmistakable conclusion: Lou Dobbs has surrendered his objectivity.

Not Quite Yet…Not Until @realDonaldTrump is the GOP Nominee. That Battle is Far From Over. #Trump2016 #Dobbs https://t.co/qDqOohLQhO

Dobbs was not always so enthusiastic about Trump. Speaking to Jimmy Fallon in 2011, Dobbs was witheringly skeptical of Trump’s qualifications to be president, saying: “He’s a well-meaning guy, a smart guy, but you know, one thing folks should always understand are their limitations.”