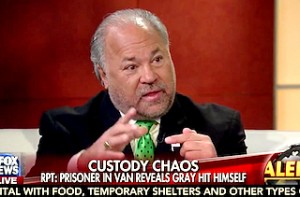 Longtime Fox News contributor Bo Dietl was mentioned by name in one of the new reports on Roger Ailes, and so he’s speaking out on what he thinks of this whole thing.

New York Magazine‘s Gabriel Sherman reported this week that he was informed by Fox sources that investigators employed by Dietl not only followed Sherman, but the woman who infamously accused Bill O’Reilly of sexual harassment over 10 years ago.

In an interview with The Daily Beast, Dietl said those reports are “a load of bullshit” and declared, “I have never been hired to do anything like that.”

But after that, Dietl came to Ailes’ defense and said it’s sad to see him “tainted” by these harassment allegations. He said that “too often, it’s like a shakedown” and attributed those claims to being overtly PC:

“Look, if someone looks really great in a dress, and you say, ‘You look really great!’ or ‘You’ve been working out, you look great!’ [what’s wrong with that?]” he asked, rhetorically. “I love women… but I think political correctness has gotten to a level that… if someone says something they construe as… being a sexual manner, right away it goes into a sexual lawsuit, and if they’re not happy with their job,” he added, they then pursue legal action.

“My experience in investigating [cases like] these is 98 percent of these are bullshit,” Dietl declared.

He laments how Ailes was “fucking destroyed” and is encouraging him to “keep fighting.”