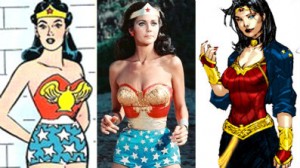 “Wonder Woman may have finally been given a pair of pants, but has she been stripped of her patriotism?

The new and allegedly improved Wonder Woman (a.k.a Diana Prince), has been given a head-to-toe makeover by artist Jim Lee, replacing her signature American flag decorated briefs with skintight black pants and purging the super hero of all her trappings of Americana.”

There are so many things to point out here: The fact that Wonder Woman is a Greek demi-goddess and not an American. The fact that she’s changed her costume before including once wearing an all-white dress that completely lost the flag look. The fact that, unlike Superman, she was not created to uphold American values but instead to “bring the Amazon ideals of love, peace, and sexual equality.” The fact that she was also created so that her creator, a psychologist named William Moulton Marston, could indulge in his love of sadomasochism that he enjoyed in his polyamorous relationship (hence all the lasso bondage). The fact that Fox News is looking for signs of anti-American sentiment in Wonder Woman’s costume!

But, I’ll leave all the more amazing details to our friends at Geekosystem.

Look, I know that it’s almost the Fourth of July. And I know that it’s nice to throw up a quick, silly story right before a long weekend (look forward to my hard-hitting post later tonight on the best speed to climb into a cold swimming pool), but this is such a blatant attempt to stir up ill-informed anger in your readers. Yes, they quickly point out the fact that this is all probably for a movie, but the subtext of the article is clear: Someone evil has made it so that Wonder Woman hates America. And it’s worked. Just check out the article’s comments:

“And with this news Batman and Robin are now seeking a civil union, Captain America has a warrant for his arrest for intimidating Mexican drug smugglers in California, and Superman will no longer claim he’s from Smallville but is from the Office of Foreign Development at the United Nations. Lee, you made money with comics n the U.S. If you must, there is the Japanation market in Asia if you must ‘Globalize.'”

My favorites are the ones that connect this back to Obama. I can just see him in his office now: “Gee, Rahm, now that I’ve set in place my plans to murder the nation’s grandparents, the only thing left is to destroy that damned Wonder Woman! Muah hah ha!”

There are plenty of things that are wrong with this country and wrong with this world. Fox News, you’re not going to find them in the pages of Wonder Woman. And besides, if you really wanted to get her for something, why don’t you hassle her for not having FAA clearance on that invisible jet of hers. Now that’s a story that the American people need to hear about!

UPDATE: True to form, Geekosystem’s Susana Polo has a hilarious post about what Fox News should really attack Wonder Woman for.