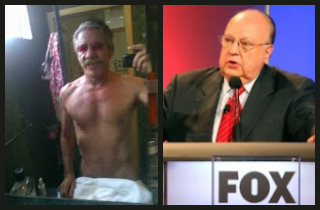 Thursday could not have been a more apt day for Fox News CEO Roger Ailes to hold the 21st Century Fox investor conference, given the big news about Megyn Kelly potentially moving to primetime. When pressed by Neil Cavuto, Ailes avoided directly weighing in, yet according to TVNewser, he somehow managed to work in a jab at Geraldo Rivera over that picture we all saw and then quickly tried to forget.

Ailes talked a lot about potential programming shifts at Fox News yesterday, and praised practically everyone at the network, even Rivera. But his kind words for Rivera were tempered with some stinging quips.

“There are always people that will rise to the occasion when there is no occasion, but it is hard to find people will do it when there is,” Ailes said, praising Rivera, before adding “Naked pictures when you are drunk is still stupid.”

But that wasn’t the only arrow Ailes had in his quiver. He surmised that he’d like to continue working instead of retiring in a few years, even suggesting he might go on Dancing With The Stars. When Cavuto noted Rivera once turned down the show, Ailes shot back, “He doesn’t need it. He’s up there shooting pictures of himself in the middle of the night.”

Then again, if Ailes is really serious about game-changing programming moves at Fox, he should replace Bill O’Reilly‘s 11 P.M. repeats with a new show: Geraldo After Dark. You know people would watch.